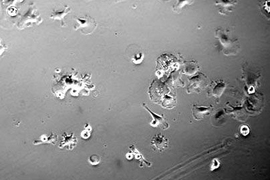 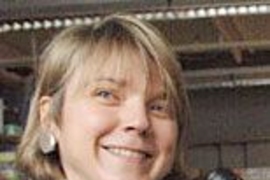 Caption:
MIT researchers have discovered that treating bone marrow stem cells with a growth factor called EGF promotes their survival and growth when the EGF is tethered to a scaffold. This image shows stem cells with no EGF treatment. <a onclick="MM_openBrWindow('stem-cells-1-enlarged.html','','width=509, height=583')">
<span onmouseover="this.className='cursorChange';">Open image gallery</span>
</a>
<noscript> <a href="stem-cells-1-enlarged.html">
<em>(no JavaScript)</em>
</a>
</noscript>
Credits:
Photo courtesy / Linda Griffith

MIT researchers have developed a technique to encourage the survival and growth of adult stem cells, a step that could help realize the therapeutic potential of such cells.

Adult stem cells, found in many tissues in the body, are precursor cells for specific cell types. For example, stem cells found in the bone marrow develop into blood cells, bone cells and other connective tissues, and neural stem cells develop into brain tissue.

Griffith is the senior author of a recent study showing that when presented in the right physical context, certain growth factors encourage the survival and proliferation of bone marrow mesenchymal stem cells grown outside of the body.

The work offers hope that one day, stem cells removed from a patient could be transplanted to an injury site and induced to grow into new, healthy tissue. The research appears in the January 18 online issue
of Stem Cells.

Griffith's team focused on the potential for mesenchymal stem cells to grow into new bone in patients with bone cancer or severe bone injuries. Current treatment for such patients involves replacing the bone with either cadaver bone or, more commonly, a piece of the patient's hip bone.

Ideally, surgeons would like to be able to aspirate bone marrow from the hip, which is a much less painful and invasive process than removing bone, and transplant the stem cells from that marrow into
the injury site.

Although patients' own marrow has been used successfully in certain situations, Griffith and her clinical collaborators believe that the inflammatory response following transplant may limit survival of cells under many clinical conditions.

To avoid that deadly response, Griffith and her team sought a way to manipulate the environment surrounding the cells to make conditions more favorable for survival. They zeroed in on a growth factor known as EGF, which plays a role in growth and differentiation of many cells, including stem cells. However, its ability to protect stem cells against the sort of pro-death signals found at the implant site was previously unknown.

When EGF attaches to receptors on the stem cell surface, it activates many pathways that can influence stem cell proliferation, migration and differentiation. However, the cell normally absorbs EGF and degrades it, and the growth factor loses its power to influence cell behavior. This has made EGF notoriously difficult to develop as a clinical product for wound healing.

To control this, the researchers decided to tether EGF to a scaffold, preventing the stem cells from eating it up and allowing continuous EGF exposure on the cell surface.

"Putting them on a scaffold is appealing because then you can control the concentration and location and so forth," Griffith said. The ceramic and polymer scaffold, which remains in the patient's body during healing but then resorbs, also provides structure for the stem cells as they grow into new bone cells.

"We found that when EGF was tethered to the surface it elicited different cell responses than it did when given to cells in the usual soluble form," Griffith said. "When tethered, it protected the cells
from being killed by pro-death inflammatory signals. The soluble version of the factor did not protect cells."

So far all of the experiments have been done in vitro, or outside the body, but the researchers are currently planning studies in animals.

"I'm very optimistic about the potential for adult stem cells to be useful clinically for the problems I work on, since there are already some clinical successes based on these cells" she said. "Continuing, careful, methodical work will lead to improved therapies based on adult stem cells. We are aiming to expand the range of therapies that work in the clinic." Griffith is one of several MIT biological engineering faculty members who work with adult stem cells but not human embryonic stem cells.

Griffith is also one among many scientists around the world who have at least some objections to creation of human embryonic stem cells, for a variety of reasons. She says her current focus on adult stem cells is driven largely by the interesting science and the feasibility for near-term clinical use for the types of cells she investigates. However, she also avoids research with human embryonic stem cells following a personal experience with in vitro fertilization almost 10 years ago.

"Like some other scientists I know, my personal views about creating human ES cell lines changed when confronted with the reality of doing so from my own embryos. After this experience, I was not comfortable conducting human ES cell research myself, and I have a better understanding of why some scientists object to all work with human ES cells," she said. She also said she feels her personal views, and those of others, are respected in the scientific community.

Currently, federally funded research is only allowed on certain established lines of embryonic stem cells, although a few states, including California and Connecticut, offer state funding for broader embryonic stem cell research. There are no legal restrictions on funding to study adult stem cells.

Griffith's recent work was funded by the National Institutes of Health and the Harvard School of Dental Medicine.

A version of this article appeared in MIT Tech Talk on March 7, 2007 (download PDF).