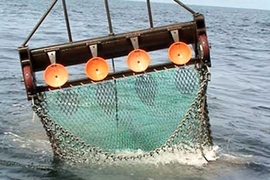 CAMBRIDGE, Mass.--Cliff Goudey's version of the better mousetrap is the better scallop dredge.

The director of MIT Sea Grant's Center for Fisheries Engineering Research wants to build a better dredge-even though he's the first to admit that current dredges do a fine job of catching the creatures.

What current dredges don't do, says Goudey, is take into consideration unintended consequences, such as damaging bottom habitat -- a concern since the 1986 reauthorization of the Magnuson-Stevens Act introduced the issue of essential fish habitat.

The standard dredge used to harvest scallops consists of a heavy steel towing frame and a chain bag that drags along the sea floor behind the frame. The dredge includes a cutting bar, which has little effect on a perfectly level bottom. However, on a more typical sea bottom with sand waves or humps and valleys, the cutting bar levels the bottom so that the chain bag can scoop up scallops in its path. But along with the scallops, says Goudey, other organisms living on and buried just below the surface can get caught or damaged.

Is there a way to catch scallops without leveling the bottom in front of the dredge?

Goudey figured that would require disturbing or lifting the scallops, in preparation for the chain bag, without physically contacting the ground. The best option for that, he decided, was to use jets of water. So Goudey experimented with devices of different shapes and sizes to see how they affected scallop shells placed on the bottom of MIT's towing tank. The most promising results were implemented in a prototype dredge.

"We built a small dredge fitted with four 11-inch hollow hemispheres positioned close to the seabed and mounted on pivots so that if they hit something they could deflect up out of the way," says Goudey. The hemispheres "produce a downward directed jet of water that seems to have a profound effect on scallops when they're hit by it," he explains. Goudey notes that most mobile creatures near the dredge can escape from its path. "While a conventional dredge impacts subsurface organisms, this one does not," he said.

"Essentially the scallops...start spinning up in the water high enough so that they're still suspended in the water when the chain bag comes by."

In field tests on Stellwagen Bank off the Massachusetts coastline, the newfangled scallop dredge caught 50- to 60 percent of a normal catch. "We believe that with a little adjusting...that catch rate could become competitive," says Goudey.

A talk Goudey gave prompted an invitation from the University of Wales in Ireland to try the dredge out off the Isle of Man. So in April, Goudey shipped the dredge across the Atlantic, then followed along for field tests.

In those trials, the researchers used the dredge aboard a research vessel and a commercial scallop trawler, both with the participation of local fishermen. The dredge was particularly successful in catching queen scallops. A lower than expected catch of larger types of scallops suggested that some simple modifications may make the dredge more effective. Additionally, the dredge caused far less damage to scallops than conventional gear. As a result, Ireland may employ a version of the gear as part of a developing management strategy for scallop fisheries.