Joint effort: Robotic ankle research gets off on the right foot 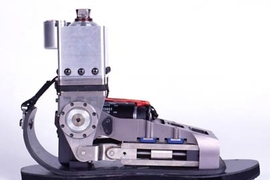 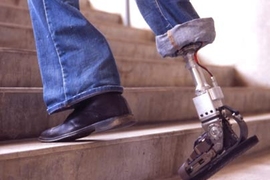 An Army veteran who lost part of his leg in Iraq walked with more spring in his step Monday as he unveiled the world's first robotic ankle -- an important advance for lower-limb amputees that was developed by a team at MIT.

Garth Stewart, 24, who lost his left leg below the knee in an explosion in Iraq, demonstrated the new powered ankle-foot prosthesis during a ceremony at the Providence, R.I., Veterans Affairs Medical Center. Stewart walked in the device, which, unlike any other, propels users forward using tendon-like springs and an electric motor. The prototype device reduces fatigue, improves balance and provides amputees with a more fluid gait. It could become commercially available as early as the summer of 2008.

MIT Media Lab Professor Hugh Herr and his team of researchers developed the ankle-foot. Herr, NEC Career Development Professor and head of the biomechatronics research group at the Media Lab, is a VA research investigator. He is also a double amputee who tested his invention: "This design releases three times the power of a conventional prosthesis to propel you forward and, for the first time, provides amputees with a truly humanlike gait," Herr said.

"It's wild," he said, "like you're on one of those moving walkways in the airport."

Because conventional prostheses only provide a passive spring response during walking, they force the amputee to have an unnatural gait and typically to expend some 30 percent more energy on walking than a non-amputee. The new ankle is light, flexible, and -- most importantly -- generates energy for walking beyond that which can be released from a spring alone.

This is accomplished through a device equipped with multiple springs and a small battery-powered motor. The energy produced from the forward motion of the person wearing the prosthesis is stored in the power-assisted spring, and then released as the foot pushes off. Additional mechanical energy is also added to help momentum.

Herr created the device through the Center for Restorative and Regenerative Medicine (CRRM), a collaborative research initiative that includes the Providence VA Medical Center, Brown University and MIT. The center's mission is to improve the lives of individuals with limb trauma through tissue restoration, advanced rehabilitation and new prosthetics that give amputees - particularly war veterans - better mobility and control of their limbs and reduce the discomfort and infections common with current prostheses.

To achieve this goal, the center funds a team of researchers with expertise in tissue engineering, orthopedics, neurotechnology, prosthetic design and rehabilitation. The aim is to bring these complementary techniques together to create "biohybrid" limbs composed of biological and man-made materials - a melding of man and machine.

To meet this goal, the VA has provided an additional $6.9 million to construct a state-of-the-art rehabilitation research building that will house the center on the campus of the Providence VA Medical Center. Construction begins this fall.

"A major goal of the center is to develop artificial limbs that perform like biological ones," said Professor Roy Aaron, M.D., of Brown University, director of the CRRM. "Hugh Herr and his team have met that goal - and done so successfully. This device is a major step forward for Garth Stewart and other amputees."

Joel Kupersmith, M.D., chief research and development officer for VA, said a top priority for the department is providing state-of-the-art prosthetic care for veterans - especially those returning from Iraq and Afghanistan. VA research, he said, is integral to this effort.

"The robotic ankle is a sterling example of how our leading-edge research improves veterans' lives," Kupersmith said. "Up to now, prosthetic devices have not been able to duplicate the complex functions of our feet and ankles as we walk and run. The ingenious computerized design of this new prosthesis changes all of this, as it constantly 'thinks' and responds, allowing the person to walk or run in a more natural and comfortable way."

Michael E. Selzer, M.D., director of Rehabilitation Research and Development for VA, agreed: "Hugh Herr and his Media Lab group are well-known for their scientific ingenuity and creativity on behalf of amputees. This new technology represents rehabilitation research at its finest, and is yet another milestone in VA's long history of outstanding achievements in this area."

What's next? According to Herr, within the next year he hopes to get small, wireless implants into his muscles near the neuromuscular juncture, so that when the muscle contracts, the electrical impulse will send precise information to control the artificial limb. Looking longer term, Herr is working with Brown's Aaron to determine if an implant could be used to mechanically attach the artificial limb directly to the amputee's residual limb bone. The goal: to transmit loads directly to the bone structure of the amputee, eliminating the discomfort now experienced with conventional prostheses.