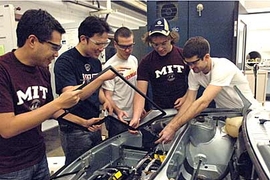 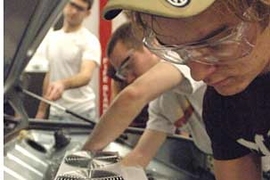 Caption:
Mechanical engineering students Craig Wildman G, backround and Ryan King '09, center, and Jeremy Kuempel '10 work on putting together the porsche in Sloan Automotive Lab. They are installing a motor controller into the rear trunk compartment of the vehicle.
Credits:
Photo / Donna Coveney

For the past six months a team of MIT students has spent hundreds of hours--many late at night--converting a sleek Porsche 914 into an electric vehicle. Their goal? To demonstrate the viability of advanced electric vehicle technology and to help clarify what research and development has yet to be done.

The Porsche was donated by Professor Yang Shao-Horn of mechanical engineering, who with her husband, Quinn Horn, bought it off eBay and made it available to students interested in converting it to an electric-powered vehicle. In addition to providing an unusual opportunity for hands-on learning, the project will ultimately yield information valuable to Shao-Horn's research on advanced batteries. Specifically, she and her team in the Electrochemical Energy Laboratory will be able to measure the conditions that batteries encounter inside an operating vehicle.

"In the laboratory we work on materials to make batteries safer, last longer and have higher energy," she said. "But we are also interested in gaining a good perspective on the system view. What's involved in building an electric vehicle, and what's required of the batteries?"

The student project took off a year ago when Valence Technology, Inc., agreed to donate 18 high-tech rechargeable batteries valued at $2,030 each, plus a battery-management system. While today's electric cars generally operate on conventional lead-acid batteries, Valence provided its enabling lithium phosphate rechargeable batteries, which are lighter, last longer, charge up faster, have a longer lifetime and don't pose a safety risk.

Leading the assembly team in the Sloan Automotive Laboratory is senior Emmanuel Sin, who was awarded the Peter Griffith Prize for an "outstanding experimental project and thesis" by the Department of Mechanical Engineering in May.

Sin's main collaborators on the project are sophomore Ryan King of mechanical engineering; freshman Jeremy Kuempel; graduate student Gerardo Jose la O', who initiated the project; and graduate student David Danielson, who obtained funding for supplies and tools from Maniv Energy Capital, LLC. Both la O' and Danielson are in the Department of Materials Science and Engineering.

To make the conversion, the students replaced the original engine with an electric motor, 12 of the batteries, the battery-management system, various relays and a controller that makes all the components work together. Things haven't always gone smoothly. "There's been a lot of adapting things that don't work as they're designed," said King. "We had to come up with some creative solutions."

In the next few weeks they hope to put the Porsche through its paces. For example, they'll determine its acceleration and top speed and will see how far it will go on a single charge.

According to their best estimates, the car should produce 50 to 60 horsepower and have a top speed of 70 to 100 mph. Plugging it into a wall socket should fully recharge the batteries in four to five hours, and it should then go 100 miles or more before it needs recharging.