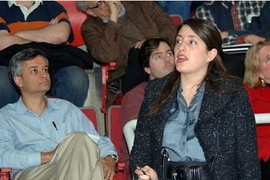 ↓ Download Image
Caption: MIT postdoc Jocelyn Monroe captivated her audience during her April 11 talk announcing the results of an experiment that could have changed some of the basic elements of particle physics.
Credits: Photo / Donna Coveney

Caption:
MIT postdoc Jocelyn Monroe captivated her audience during her April 11 talk announcing the results of an experiment that could have changed some of the basic elements of particle physics.
Credits:
Photo / Donna Coveney

Physicists can rest easy--the Standard Model of Particle Physics is still in effect.

More than 100 MIT students and professors jammed into Room 35-225 on Wednesday, April 11, to hear the long-anticipated results of a particle detection experiment designed to produce evidence that would confirm or reject the model, which outlines the elements of particle physics.

MIT postdoctoral associate Jocelyn Monroe, who worked on the experiment, prolonged the suspense, revealing the results about half an hour into her talk. The outcome? The standard model is still safe: The experiment confirms the model's prediction that there are only three types of neutrinos (tiny elementary particles that are components of atoms).

Some of the assembled crowd seemed disappointed that the foundation of particle physics had not been upended.

"This was such a big question. It would have changed everything" if they found evidence for a fourth neutrino, Monroe said last week, after her lecture.

Experiments done in the 1990s at the Liquid Scintillator Neutrino Detector (LSND) at the Los Alamos National Laboratory offered strong indirect evidence for the existence of a fourth neutrino, but the results were controversial. So another experiment, the Booster Neutrino Experiment (MinibooNE) was launched in late 2002 to try to replicate the results.

"It was very important to confirm or refute the LSND result," said Monroe, a Pappalardo Fellow who arrived at MIT last September and worked on the MinibooNE project as a graduate student at Columbia University.

Neutrinos are generated by nuclear reactions, such as those that occur in the sun or in nuclear reactors. Most come from the sun: More than 50 trillion solar neutrinos pass through the human body every second, but they are extremely difficult to detect because they have no charge and a mass so tiny it has never been measured.

Currently scientists know that there are three types, or "flavors," of neutrinos--electron neutrinos, muon neutrinos and tau neutrinos. Experiments have shown that these neutrinos can oscillate from one flavor to another. However, the LSND experiments offered evidence for a fourth flavor, a "sterile" neutrino, which would call the Standard Model of Particle Physics into question.

The model, developed in the 1970s, is based on Einstein's theory of relativity and outlines the 16 types of subatomic particles (including the three neutrinos) that physicists have identified.

"The Standard Model is the periodic table of particle physics," Monroe said. "If the MinibooNE experiment found that extra particles needed to go into that, it would have been very, very exciting."

The MinibooNE experiment, conducted at the Fermi National Accelerator Laboratory outside Chicago, was designed to detect the energy traces left behind when a neutrino collides with the nucleus of a carbon atom. The detection takes place in massive tank filled with 250,000 gallons of purified mineral oil.

Researchers generated neutrinos by firing a beam of protons at a target made of beryllium (a lightweight metal). When the beam hits the target, the protons produce particles that decay into neutrinos and other elementary particles.

During the three years that the researchers collected data, they sent 5.5 x 1020 (more than a billion billion) protons into the target, but expected to measure only 400 electron neutrinos.

"That tells you how difficult it is to measure neutrino oscillations," Monroe said.

The researchers analyzed some of the data as they went along, but they waited until the end of March to look at the last one percent of their data--in the range where evidence for the fourth neutrino would be found--to ensure no bias in interpreting the results.

The team finally looked at the critical results on March 26, during a six-hour meeting at Fermilab.

"It was such a dramatic moment," Monroe recalled. "Everyone was so tense. There were people on MinibooNE who have been studying these questions for 17 years."

Once the team started looking at the data, it soon became apparent that there were no energy oscillations in the range where they would have been expected if a fourth type of neutrino existed, Monroe said.

The MinibooNE team involved about 70 researchers from 14 institutions, and was funded by the U.S. Department of Energy and the National Science Foundation.

The MinibooNE experiment is now running a three-year study of antineutrinos, and Monroe is continuing her neutrino oscillation studies at MIT with assistant professor of physics Joseph Formaggio. She's also working with MIT physics professor Peter Fisher to come up with ways to detect dark matter, which is even more difficult to observe than neutrinos. Dark matter accounts for the vast majority of mass in the universe but has never been observed.