How Mars could have been warm and wet but limestone-free
David Chandler, MIT News Office
Publication Date:
Press Inquiries 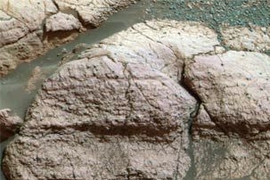 ↓ Download Image
Caption: Taken by the panoramic camera on the Mars Exploration Rover Opportunity, image shows a close up of the rock dubbed 'El Capitan.' The iron-bearing mineral jarosite, which was found in the rock, led MIT and Harvard researchers to posit that early Mars may have had the greenhouse gas sulfur dioxide in its atmosphere.
Credits: Image / NASA/JPL/Cornell

Caption:
Taken by the panoramic camera on the Mars Exploration Rover Opportunity, image shows a close up of the rock dubbed 'El Capitan.' The iron-bearing mineral jarosite, which was found in the rock, led MIT and Harvard researchers to posit that early Mars may have had the greenhouse gas sulfur dioxide in its atmosphere.
Credits:
Image / NASA/JPL/Cornell

Planetary scientists have puzzled for years over an apparent contradiction on Mars. Abundant evidence points to an early warm, wet climate on the red planet, but there's no sign of the widespread carbonate rocks, such as limestone, that should have formed in such a climate.

Now, a detailed analysis in the Dec. 21 issue of Science by MIT's Maria T. Zuber and Itay Halevy and Daniel P. Schrag of Harvard University provides a possible answer to the mystery. In addition to being warmed by a greenhouse effect caused by carbon dioxide in the atmosphere, as on Earth, the early Mars may have had the greenhouse gas sulfur dioxide in its atmosphere. That would have interfered with the formation of carbonates, explaining their absence today.

It would also explain the discovery by the twin Mars rovers, Spirit and Opportunity, of sulfur-rich minerals that apparently formed in bodies of water in that early Martian environment. And it may provide clues about the Earth's history as well.

The challenge was to interpret the planet's history, based on the data gathered by the Mars rovers--and especially Opportunity's discovery of sulfate minerals--from just tiny fractions of the surface, says Zuber, who is head of MIT's Department of Earth, Atmospheric and Planetary Sciences and the E.A. Griswold Professor of Geophysics. "How do you take very detailed measurements of chemical composition at one tiny place on Mars," she says, "and put it into the context of the broad evolution of the planet?" The breakthrough, she said, was when she and her colleagues realized "we'd been after the wrong molecule."

After several years of exploring the role of carbon dioxide and the carbon cycle, she said, they realized "maybe the key is sulfur dioxide, not carbon dioxide."

It was Opportunity's discovery of the mineral jarosite, which only forms in highly acidic water, that set them thinking about how that acidic environment could have come about. Sulfur provided the answer.

The new analysis suggests that on Mars, sulfur went through a whole cycle through the atmosphere, bodies of water on the surface, and burial in the soil and crust, comparable to the well-known carbon cycle on Earth. Through most of Earth's history, carbon dioxide has been released in volcanic eruptions, then absorbed into seawater, where it fosters the formation of calcium carbonate (limestone), which gets buried in ocean sediments.

Much evidence suggests Mars may once have had an ocean that covered about a third of the planet, in its northern hemisphere. Sulfur dioxide dissolves easily in water, so after being spewed into the atmosphere by the giant volcanoes of Mars' Tharsis bulge, much of it would have ended up in the water, where it inhibited the formation of carbonate minerals but led to the formation of silicates and sulfites, such as calcium sulfite.

These minerals degrade relatively rapidly, so they would not be expected on the surface of Mars today. But they also allow formation of clays, which have been found on Mars, and which added to the puzzle since clays are usually associated with the same conditions that produce carbonates.

The new picture of a sulfur cycle helps to solve another mystery, which is how early Mars could have been warm enough to sustain liquid water on its surface. A carbon dioxide atmosphere produces some greenhouse warming, but sulfur dioxide is a much more powerful greenhouse gas. Just 10 parts per million of sulfur dioxide in the mostly carbon dioxide air would double the amount of warming and make it easier for liquid water to be stable.

The analysis may also tell us something about our own planet's past. The early Earth's environment could well have been similar to that on Mars, but most traces of that era have been erased by Earth's very dynamic climate and tectonics. "This might have been a phase that Earth went through" in its early years, Zuber says. "It's fascinating to think about whether this process may have played a role" in the evolution of the early Earth.

The work was funded by NASA, a Radcliffe fellowship, the George Merck Fund and a Harvard graduate fellowship.