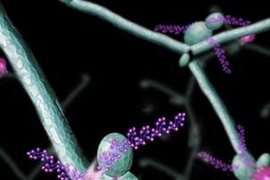 Biology textbooks are blunt--neutrophils are mindless killers. These white blood cells patrol the body and guard against infection by identifying and destroying any bacteria or fungi that cross their path. But new evidence, which may lead to better drugs to fight deadly pathogens, indicates that neutrophils might actually distinguish among their targets.

A scientist in the lab of MIT biology professor and Whitehead Institute Member Gerald Fink has discovered that neutrophils recognize and respond to a specific form of sugar called beta-1,6-glucan on the surface of fungi. This sugar comprises just a small fraction of the fungal cell wall, much less than another sugar with a slightly different chemical conformation called beta-1,3-glucan. Because the scarce form of the sugar elicits a much stronger reaction from neutrophils than the abundant one, it appears that these immune cells can distinguish between two nearly identical chemicals.

"These results show that engulfment and killing by neutrophils varies, depending on cell wall properties of the microbe," explains Whitehead postdoctoral researcher Ifat Rubin-Bejerano, first author on the paper, which appears July 11 in the journal Cell Host & Microbe. "We showed that neutrophils respond in a completely different way to slight changes in sugar composition. If we are able to use this unique sugar to excite the immune system, it may help the human body fight infection."

"Previously, everyone thought that these key cells of the immune system weren't picky and would eat anything that looked foreign," adds Fink. "Ifat's work has shown that the cells aren't little Pac-Men, but can discriminate one pathogen from another."

Previous studies indicated that blood serum (basically blood minus cells) helps neutrophils recognize their enemies, so Rubin-Bejerano decided to look for clues to their response in this mixture. She identified several proteins in serum that bind to beta-1,6-glucan, but not beta-1,3-glucan, and then pinpointed a molecule on the surface of the neutrophil that recognizes these proteins.

To link her experiments back to real fungi, Rubin-Bejerano worked with the pathogen Candida albicans, which is the most common fungus in blood stream infections. She used an enzyme to digest beta-1,6-glucan from the fungal cell wall, leaving the beta-1,3-glucan intact. She then unleashed the neutrophils on these altered cells and observed a 50 percent reduction in the immune response.

Our bodies maintain a fine balance between the immune system and microbes. Antibiotics and antifungals tilt the balance in favor of the immune system by targeting the microbes directly. A substance like beta-1,6-glucan could help tilt this balance further by stimulating immune cells.

Rubin-Bejerano's work offers hope for combating the growing problem of microbial infections, which can seriously threaten human health--particularly in patients with compromised immune systems. In fact, Rubin-Bejerano co-founded a company called ImmuneXcite to explore this possibility.

Additional authors of the paper are from the Whitehead Institute and the Goldman School of Dental Medicine in Boston. The work was supported by the National Institutes of Health.