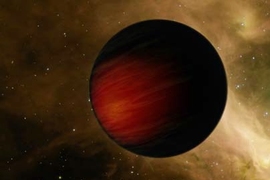 ↓ Download Image
Caption: This artist's concept illustrates the hottest planet yet observed in the universe. The scorching ball of gas, a "hot Jupiter" called HD 149026b, is a sweltering 3,700 degrees Fahrenheit (2,040 degrees Celsius) -- about 3 times hotter than the rocky surface of Venus, the hottest planet in our solar system.
Credits: Image / NASA/JPL-Caltech 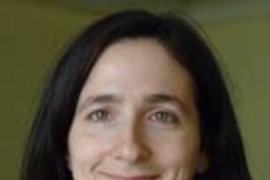 Caption:
This artist's concept illustrates the hottest planet yet observed in the universe. The scorching ball of gas, a "hot Jupiter" called HD 149026b, is a sweltering 3,700 degrees Fahrenheit (2,040 degrees Celsius) -- about 3 times hotter than the rocky surface of Venus, the hottest planet in our solar system.
Credits:
Image / NASA/JPL-Caltech

A team of scientists including one from MIT has measured the hottest planet ever at 3,700 degrees Fahrenheit, or 2,300 Kelvin.

Using Spitzer, NASA's infrared space telescope, the scientists observed the tiny planet disappear behind its star and reappear. Although the planet, known as HD 149026b, cannot be seen separately from the star, the dimming of the light that reached Spitzer told the scientists how much light the planet emits. From this they deduced the temperature on the side of the planet facing its star.

"This planet is so intriguing that it is changing the way we think about planet atmospheres," said Sara Seager, Ellen Swallow Richards Professor with appointments in the Department of Earth, Atmospheric and Planetary Sciences and the Department of Physics.

The team's findings were published in the May 9 advance online issue of Nature.

"HD 149026b is simply the most exotic, bizarre planet," said Joseph Harrington (MIT S.B. 1988, Ph.D. 1995), a professor at the University of Central Florida and leader of the work. "It's pretty small, really dense, and now we find that it's extremely hot."

Discovered in 2005, HD 149026b is a bit smaller than Saturn, making it the smallest extrasolar planet with a measured size. However, it is more massive than Saturn and is suspected of having a core 70-90 times the mass of the entire Earth. It has a comparable amount of heavy elements (material other than hydrogen and helium) to that in our whole solar system, outside the sun.

There are more than 230 known extrasolar planets, but this is only the fourth to have its temperature measured directly. It is simple to explain the temperatures of the other three planets. However, for HD 149026b to reach 3,700 degrees, it must absorb essentially all the starlight that reaches it. This means the atmosphere must be blacker than charcoal, which is unprecedented for planets. The planet would also have to re-radiate all that energy in the infrared spectrum.

"The high heat would make the planet glow slightly, so it would look like an ember in space, absorbing all incoming light but glowing a dull red," said Harrington.

Drake Deming, of NASA's Goddard Space Flight Center in Greenbelt, Md., and a co-author of the Nature paper, thinks theorists are going to be scratching their heads over this one.

"This planet is off the temperature scale that we expect for planets, so we don't really understand what's going on," Deming said. "There may be more big surprises in the future."

Other members of the team include Statia Luszcz of the University of California at Berkeley and Jeremy Richardson of NASA Goddard.