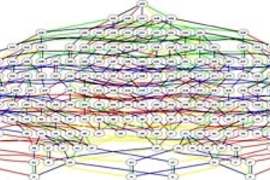 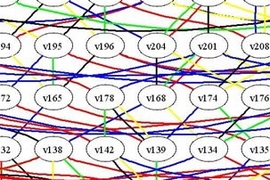 ↓ Download Image
Caption: Detail of graphic above. The connections in the graph, and the colors of the connecting edges, are shorthand describing the geometry of the structure.

Caption:
This graphic describes a mathematical structure similar to but much smaller than E8.
Credits:
Image courtesy / David Vogan, MIT

Caption:
Detail of graphic above. The connections in the graph, and the colors of the connecting edges, are shorthand describing the geometry of the structure.

An international team of 18 mathematicians, including two from MIT, has mapped one of the largest and most complicated structures in mathematics. If written out on paper, the calculation describing this structure, known as E8, would cover an area the size of Manhattan.

The work is important because it could lead to new discoveries in mathematics, physics and other fields. In addition, the innovative large-scale computing that was key to the work likely spells the future for how longstanding math problems will be solved in the 21st century.

MIT's David Vogan, a professor in the Department of Mathematics and member of the research team, presented the work Monday, March 19 to a standing-room-only crowd in Room 1-190. His talk, "The Character Table for E8, or How We Wrote Down a 453,060 x 453,060 Matrix and Found Happiness," was peppered with jokes and laughter.

E8 (pronounced "E eight") is an example of a Lie (pronounced "Lee") group. Lie groups were invented by the 19th-century Norwegian mathematician Sophus Lie to study symmetry. Underlying any symmetrical object, such as a sphere, is a Lie group. Balls, cylinders or cones are familiar examples of symmetric three-dimensional objects.

"What's attractive about studying E8 is that it's as complicated as
symmetry can get. Mathematics can almost always offer another example that's harder than the one you're looking at now, but for Lie groups E8 is the hardest one," Vogan said.

"E8 was discovered over a century ago, in 1887, and until now, no one thought the structure could ever be understood," said Jeffrey Adams, project leader and a mathematics professor at the University of Maryland. "This groundbreaking achievement is significant both as an advance in basic knowledge, as well as a major advance in the use of large-scale computing to solve complicated mathematical problems."

The mapping of E8may well have unforeseen implications in mathematics and physics that won't be evident for years to come.

"There are lots of ways that E8 appears in abstract mathematics, and it's going to be fun to try to find interpretations of our work in some of those appearances," said Vogan. "The uniqueness of E8 makes me hope that it should have a role to play in theoretical physics as well. So far the work in that direction is pretty speculative, but I'll stay hopeful."

"This is an exciting breakthrough," said Peter Sarnak, a professor of mathematics at Princeton University and chair of the scientific board at the American Institute of Mathematics (AIM). "Understanding and classifying the representations of E8 and Lie groups has been critical to understanding phenomena in many different areas of mathematics and science including algebra, geometry, number theory, physics and chemistry. This project will be invaluable for future mathematicians and scientists," said Sarnak, who was not involved in the work.

The magnitude and nature of the E8 calculation invite comparison with the Human Genome Project. The human genome, which contains all the genetic information of a cell, is less than a gigabyte in size. The result of the E8 calculation, which contains all the information about E8 and its representations, is 60 gigabytes. This is enough to store 45 days of continuous music in MP3-format.

The mapping of E8 is also unusual because it involved a large team of mathematicians, who are typically known for their solitary style. "People will look back on this project as a significant landmark and because of this breakthrough, mathematics will now be viewed as a team sport," said Brian Conrey, executive director of AIM.

The E8 calculation is part of an ambitious project sponsored by AIM and the National Science Foundation known as the Atlas of Lie Groups and Representations. The goal of the Atlas project is to determine the unitary representations-roughly speaking, symmetries of a quantum mechanical system-of all the Lie groups (E8 is the largest of the exceptional Lie groups). This is one of the most important unsolved problems of mathematics. The E8 calculation is a major step and suggests that the Atlas team is well on the way to solving this problem.

The Atlas team consists of 18 researchers from around the globe. The core group consists of Adams and Vogan, plus Dan Barbasch (Cornell), John Stembridge (University of Michigan), Peter Trapa (University of Utah), Marc van Leeuwen (University of Poitiers) and (until his death in 2006) Fokko du Cloux (University of Lyon). Additional team members include Dan Ciubotaru, the CLE Moore Instructor in MIT's Department of Mathematics, and Alfred Noel, a professor at the University of Massachusetts at Boston and an MIT visiting scholar.

A version of this article appeared in MIT Tech Talk on March 21, 2007 (download PDF).