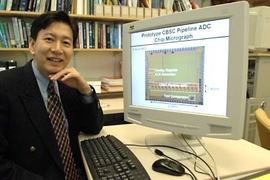 Advances in digital electronic circuits have prompted the boost in functions and ever- smaller size of such popular consumer goods as digital cameras, MP3 players and digital televisions. But the same cannot be said of the older analog circuits in the same devices, which process natural sights and sounds in the real world. Because analog circuits haven't enjoyed a similar rate of progress, they are draining power and causing other bottlenecks in improved consumer electronic devices.

Now MIT engineers have devised new analog circuits they hope will change that. Their work was discussed at the International Solid State Circuits Conference (ISSCC) in San Francisco Feb. 11-15.

"During the past several decades engineers have focused on allowing signals to be processed and stored in digital forms," said Hae-Seung Lee, a professor in MIT's Microsystems Technology Laboratories (MTL) and the Department of Electrical Engineering and Computer Science (EECS). "But most real-world signals are analog signals, so analog circuits are an essential part of most electronic systems."

Analog circuits are used to amplify, process and filter analog signals and convert them to digital signals, or vice versa, so the real world and electronic devices can talk to each other. Analog signals are continuous and they vary in size, whereas digital signals have specific or discrete values.

The reason the two different types of electronic signal circuits did not advance at the same pace, Lee said, is because they are very different. Digital circuits can be decreased in size more easily, for example, by using the popular complementary metal oxide semiconductor (CMOS) technology. And much of the design and performance enhancement can actually be done by computer software rather than by a human. That's not the case with analog circuits, which Lee said require clever designs by humans to be improved because of their variable nature.

"There is a lot of room for innovation in the human design," he said. "The importance of analog circuits is growing in light of the digital improvements, so engineers can make a difference in products by working on them." Currently, analog circuits are rather expensive and they consume a disproportionate amount of power compared with digital circuits.

In addition, it still is not clear whether traditional operational amplifier-based circuits can be applied to emerging technologies such as carbon nanotube/nanowire devices and molecular devices.

"The new work coming out of MIT offers the intriguing possibility of eliminating operational amplifiers by proposing an architecture that relies on circuit blocks that are much more readily implemented on supply voltages of 1 volt or less," said Dave Robertson, high-speed converter product line director at Analog Devices Inc. in Norwood, Mass., and data converter subcommittee chair at ISSCC.

Lee said CBSC may enable high-performance analog circuits in emerging technologies because it would be easier to implement comparators than operational amplifiers in these technologies.

A version of this article appeared in MIT Tech Talk on February 28, 2007 (download PDF).