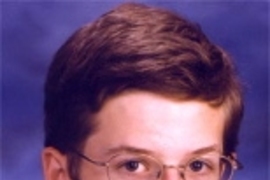 The body of Daniel Barclay, an MIT graduate student who had been missing for nearly two weeks, was found washed ashore on Cape Cod last Thursday, April 19, according to news reports. With that sad discovery, a bright light and keen wit were lost to Barclay's family and friends.

Barclay's body was found on Scusset Beach in Sandwich, Mass.; it was identified by his family on Friday, according to the Boston Globe. The cause of death was drowning, although the medical examiner is waiting for the results of routine toxicology tests. Cape and Islands District Attorney Michael O'Keefe told the Globe that there were no indications of foul play.

He had been missing since April 8 and was last seen in his Ashdown House residence.

According to The Tech, Barclay's last known communications were a phone call to his grandmother and an instant message to some classmates.

Those same classmates, as well as friends and teachers from Barclay's high school and childhood years in Menlo Park, California, poured their sadness, affection and happy memories of the former 'Quiz Kid' onto a web site set up by Barclay's mother, 1978 MIT alumna Susan Kayton.

Richard Samuels, director of the Center for International Studies, was Barclay's freshman advisor. According to Samuels, Barclay possessed not only an "unusually attractive package of geniality and intense intelligence," but also a great sense of humor. Samuels wrote he was "grateful to him for making jokesâ€¦His playful e-mails put a smile on my face."

Barclay is survived by his mother, his father, Michael Barclay, and his sister, Rachel, 19. A memorial service at MIT has been tentatively scheduled for Thursday, April 26, in the MIT Chapel, and a memorial will be planned in California in the coming weeks.

To read more memories of Barclay, to contribute your own, or to find out about memorial service plans, please go to www.suekayton.com/daniel.htm.