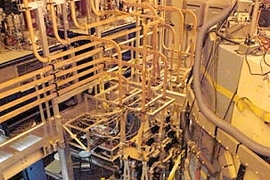 For about six months of the year, bursts of a hot, electrically charged gas, or plasma, swirl around a donut-shaped vacuum vessel in a special MIT experimental reactor, helping scientists learn more about a potential future energy source: nuclear fusion.

During downtimes when the reactor is offline, as it is right now, engineers make upgrades that will help them achieve their goal of making fusion a viable energy source--a long-standing mission that will likely continue for decades.

MIT's experimental reactor, known as Alcator C-Mod, is one of several tokamak plasma discharge reactors in the world. Inside the reactor, magnetic fields control the superheated plasma (up to 50 million degrees Kelvin) as it flows around the donut-shaped vessel.

Fusion occurs when two deuterons, or one deuteron and one triton--nuclei of heavy hydrogen--fuse, creating helium and releasing energy. The reactions can only occur at extremely high temperatures.

Although MIT's experimental reactor is smaller than others, it has a stronger magnetic field than some larger reactors, allowing the plasma to become denser at comparable temperatures. "That positions us to provide important data you can't get anywhere else," said Earl Marmar, head of MIT's Alcator C-Mod project and senior research scientist in the Department of Physics and at MIT's Plasma Science and Fusion Center (PSFC) where the Alcator C-Mod device is located. The project is funded by the Department of Energy, Office of Fusion Energy Sciences, and it is a national facility.

One major goal of the upgrades is to create a system where plasma can flow in a steady state, rather than short pulses, or bursts.

Last year, engineers added a microwave generator that creates phased waves that flow around the plasma ring, reinforcing the plasma current. The microwaves interact with the highest velocity electrons in the plasma, pushing them around the ring. Last year's initial experiments with the new microwave generator have already provided exciting results, driving as much as 800,000 amperes of current in the plasma with nearly one million watts of input power. More results are expected this year.

"It's possible to use this approach to go to fully steady-state plasma," Marmar said. "As an attractive energy source, ultimately we want steady state."

Benefits of a steady-state system include a constant energy output, less need for energy storage and less stress on the system, he said.

This year's modifications include the installation of a cryopump, which will allow scientists to control the density of the plasma over a long period of time--another necessary step to achieving a steady-state flow.

The reactor, which has been offline for upgrades since August, is expected to be ready to use again starting in March.

More than 100 researchers, including physicists and engineers from the PSFC, about 30 graduate students and faculty from the Departments of Physics, Nuclear Science and Engineering, and Electrical Engineering and Computer Science, as well as visiting scientists and graduate students, run experiments on Alcator C-Mod.

On a recent morning, the control room, normally packed with scientists at about 100 computer monitors, was nearly empty while engineers, scientists and students worked on modifications to the reactor, located in the next room.

When experiments are going on, researchers from around the world can participate in and watch the proceedings through the Internet.

There is high demand for time to run experiments on the reactor, but priority is given to projects that have high relevance to the Alcator goals and also to MIT graduate student research projects.

"One of our highest priorities is to get graduate students the run time they need," Marmar said.