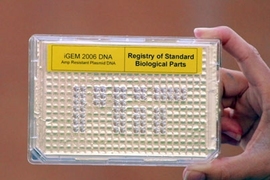 ↓ Download Image
Caption: This plate containing pieces of DNA is part of the Registry of Standard Biological Parts developed at MIT for work in synthetic biology.
Credits: Photo / Randy Rettberg/MIT

Caption:
This plate containing pieces of DNA is part of the Registry of Standard Biological Parts developed at MIT for work in synthetic biology.
Credits:
Photo / Randy Rettberg/MIT

Five MIT researchers are among the pioneers behind a new research center in synthetic biology, a precocious field whose primary long-term goal is to make it easier to design and build useful organisms.

Current work includes refining pieces of DNA into standard biological parts that researchers could then mix and match to produce novel biological systems -- such as bacteria that synthesize rare cancer drugs -- and also fostering the responsible development and application of next-generation biological technologies.

The Synthetic Biology Engineering Research Center (SynBERC) is funded by a five-year, $17 million grant from the National Science Foundation.

In addition to MIT, participating universities are the University of California at Berkeley; Harvard University; University of California at San Francisco; and Prairie View A&M University. Matching funds from industry and these universities bring the total five-year commitment to $20 million, with NSF offering the possibility of a five-year extension of the grant. The center is managed via the California Institute for Quantitative Biomedical Research and directed by Professor Jay Keasling of UC Berkeley. The work of the center will be distributed, with major nodes in Cambridge and in San Francisco.

"SynBERC is the first time we've had long-term support to improve the technical foundations that underlie the engineering of biology," said Andrew D. Endy, an assistant professor in MIT's Division of Biological Engineering and a co-investigator in the new center.

SynBERC will build on 10 years of synthetic biology research. Most notably for MIT, the center will allow expanded support for the Registry of Standard Biological Parts, a worldwide resource started in 2003 to promote the framework of interchangeable biological parts, or BioBricks, pioneered by Thomas F. Knight Jr., another SynBERC investigator and senior research scientist in MIT's Department of Electrical Engineering and Computer Science.

The registry aims to promote synthetic biology in the same way that the adoption of a uniform system of screw threads in the 1860s made it easier to build machines, and the simplification of integrated electronic circuit design in the 1970s paved the way for today's microprocessors.

"Our view of engineering biology focuses on the abstraction and standardization of biological components. The registry is the field's first catalog of standard biological parts," said Randy Rettberg, a SynBERC investigator, director of the registry and principal research engineer in MIT's Biological Engineering Division.

"iGEM 2006 grew from a small short course that we first taught at MIT in January of 2003. This summer there are teams of students at 38 schools around the world competing to make the coolest synthetic biological systems, from bacteria that smell like fruit-stripe gum to yeast that count," said Rettberg. Endy added, "iGEM also benefits from and feeds back into Course 20, MIT's new major in biological engineering."

SynBERC's foundational research will be motivated by pressing biotechnology applications.

For example, Kristala Jones Prather, an assistant professor in MIT's Department of Chemical Engineering and SynBERC investigator, will lead a project to engineer microbes to produce vincristine and vinblastine -- two drugs that are given as treatments for some types of cancer but that today must be extracted at high cost from Madagascar periwinkle plants.

Prather is also developing tools to facilitate the design and construction of novel biosynthetic routes to chemicals.

Another project led by Chris Voigt of UCSF will attempt to engineer bacteria with genetic sensors, logic and actuators such that the microbes can actively seek and destroy tumors.

Other key SynBERC work will examine the ethical, economic and biosecurity implications of synthetic biology and assess the effects of intellectual property and security regimes on the development of the field. Kenneth Oye, an associate professor of political science and engineering systems, will co-direct SynBERC's societal research with Paul Rabinow, a philosopher and anthropologist at UC Berkeley.

This work will build on MIT's Program on Emerging Technologies, an NSF-sponsored program led by Dean for Undergraduate Education Daniel Hastings and Professors Oye, Dava Newman and Merritt Roe Smith. It will also build on an ongoing study sponsored by the Alfred P. Sloan Foundation that is considering the impact of next-generation DNA synthesis technologies, and a series of topical conversations sponsored by MIT's Technology and Culture Forum.