Astronomers proclaim Pluto is a planet 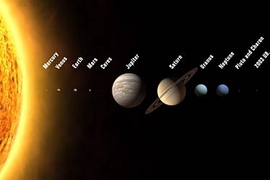 ↓ Download Image
Caption: World astronomers have redefined what a planet is, resulting in a new view of our solar system as consisting of 12 planets. In this artist rendering, the planets are, from left: Mercury, Venus, Earth, Mars, Ceres, Jupiter, Saturn, Uranus, Neptune, Pluto, Charon and 2003 UB313. The new definitions resulted from work by an International Astronomical Union panel that included MIT Professor Richard Binzel.
Credits: Image / IAU, Martin Kornmesser

Caption:
World astronomers have redefined what a planet is, resulting in a new view of our solar system as consisting of 12 planets. In this artist rendering, the planets are, from left: Mercury, Venus, Earth, Mars, Ceres, Jupiter, Saturn, Uranus, Neptune, Pluto, Charon and 2003 UB313. The new definitions resulted from work by an International Astronomical Union panel that included MIT Professor Richard Binzel.
Credits:
Image / IAU, Martin Kornmesser

Yes, Virginia, Pluto is a planet.

And it's about to be joined by several more, thanks to a new definition of the word "planet" announced today by the world's astronomers through the International Astronomical Union (IAU).

The seven-person international panel that spent two years defining the difference between planets and smaller "solar system bodies" such as comets and asteroids includes an MIT astronomer.

If the definition is approved this week at the IAU General Assembly in Prague, our solar system will include 12 planets, with more to come. They include the eight classical planets that dominate the system, three planets in a new and growing category of "plutons" - Pluto-like objects - and Ceres. Pluto remains a planet and is the prototype for the new category of plutons.

"It's time to rewrite the textbooks," said Richard Binzel, an MIT professor of planetary science in the Department of Earth, Atmospheric and Planetary Sciences.

According to the new draft definition, two conditions must be satisfied for an object to be called a planet. First, the object must be in orbit around a star, while not being itself a star. Second, the object must be large enough (or, to be more technically correct, massive enough) for its own gravity to pull it into a nearly spherical shape.

"We reached a unanimous recommendation on how to define the word 'planet' based on what nature tells us. So in reality, it is nature that has the final say on whether or not an object is a planet," Binzel said.

Binzel noted that "the new definition for 'planet' can be applied not only (to objects in) our solar system, but also to objects orbiting other stars."

The IAU draft resolution also defines a new category of planet for official use: "pluton." Plutons are distinguished from classical planets in that they take more than 200 years to complete their orbit around the sun (i.e. they orbit beyond Neptune). Plutons typically have orbits that are highly tilted with respect to the classical planets.

Plutons also typically have orbits that are far from being perfectly circular. All of these distinguishing characteristics for plutons are scientifically interesting in that they suggest a different origin from the classical planets.

Why the need for a new definition?

For thousands of years very little was known about the planets other than that they were objects that moved in the sky with respect to the background of fixed stars. But today, hosts of newly discovered large objects in the outer regions of our solar system present a challenge to our historically based definition of a "planet."

At first glance, one would think that it is easy to define what a planet is - a large and round body. On second thought, difficulties arise. Where is the lower limit? How large and how round should an asteroid be before it becomes a planet?

The IAU has been the arbiter of planetary and satellite nomenclature since its inception in 1919. As a result, it convened the Planet Definition Committee that crafted the new definition.

"The idea behind this panel was to try to merge scientists, science writers and historians to take a very wide cultural view of what the definition of a planet should be," Binzel said.

"Defining 'planet' is a semantic question, really, but our panel tried to look at it in a scientific way."

If the proposed resolution is passed, the 12 planets in our solar system will be Mercury, Venus, Earth, Mars, Ceres (described as a "dwarf planet" because it is smaller than Mercury), Jupiter, Saturn, Uranus, Neptune, Pluto, Charon and 2003 UB313. The latter three are plutons. (The name 2003 UB313 is provisional, as a "real" name has not yet been assigned to this object.)

There will most likely be more planets announced by the IAU in the future. Currently a dozen "candidate planets" are listed on IAU's "watchlist," which keeps changing as new objects are found and the physics of the existing candidates becomes better known.