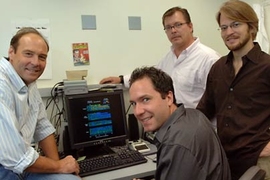 Finally confirming a fact that remained unproven for more than 30 years, researchers at MIT's Picower Institute for Learning and Memory report in the Aug. 25 issue of Science that certain key connections among neurons get stronger when we learn.

"We show what everyone has always believed: LTP (long-term potentiation) is indeed induced in the hippocampus when learning occurs," said Mark F. Bear, Picower Professor of Neuroscience. "This is a big deal for neuroscientists because such evidence has been absent for the 30-plus years we have known about LTP."

The findings described in the Bear paper and in a second, separate paper in the same issue of Science "substantially advance the case for LTP as a neural mechanism for memory," wrote Tim Bliss of the MRC National Institute for Medical Research in the UK, Graham Collingridge of the University of Bristol, and Serge Laroche of the UniversitÃ© Paris Sud in a commentary on the work.

LTP is an example of plasticity -- the amazing ability of the brain to change in response to experience. LTP builds up synapses, or the connections between neurons, while its counterpart, long-term depression, or LTD, pares unused synapses.

Since LTP was discovered in the late 1960s, thousands of papers have been published based on the assumption that the phenomenon is an important learning and memory mechanism in the hippocampus, the memory center of the brain.

Researchers had found that electrical stimulation of neurons, mimicking the electrical impulses that zap around the brain when it responds to sensory input, strengthens the connections among synapses. The assumption was that LTP occurs in the hippocampus as a consequence of learning, but there had never been conclusive evidence that learning was directly tied to LTP.

The problems were threefold.

Many learning tasks require more than one repetition of an event, and slight differences in animals' rates of learning obscured the time-sensitive markers of LTP. Second, the synaptic changes that occur in hippocampus-based learning are few and far between, making them hard to detect. Third, it became apparent that learning could be stored through LTD as well as LTP.

Using techniques pioneered by MIT's Susumu Tonegawa, director of the Picower Institute, neuroscientists began to pinpoint exactly which genes and proteins are involved in learning.

This created a "big thicket of correlations, but it never proved causality," said Bear, who also holds an appointment in MIT's Department of Brain and Cognitive Sciences. "Our contribution was that we had learned enough about LTP and the traces it leaves in the brain to track changes in proteins. We asked whether learning induces the same subtle changes."

In the experiment, rats learned that if they darted into the darkened area of a two-chambered box, they received an unpleasant foot shock. The animals quickly learned to avoid the darkened chamber and stay in the brightly lit area.

The researchers used biochemical probes that "marked" synapses that had recently been modified by learning, as well as a technique that allowed them to eavesdrop on the synaptic transmissions in the rats' brains as they learned. Learning, they found, did indeed induce LTP among synapses in the hippocampus.

This work is supported by the Howard Hughes Medical Institute and the National Institute for Mental Health.