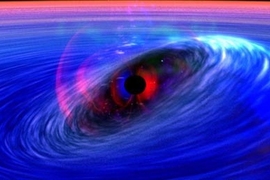 MIT scientists and colleagues have found a black hole that has chiseled a remarkably stable indentation in the fabric of space and time, like a dimple in one's favorite spot on the sofa.

The finding may help scientists measure a black hole's mass and how it spins, two long-sought measurements, by virtue of the extent of this indentation. Using NASA's Rossi X-ray Timing Explorer, the team saw identical patterns in the X-ray light emitted near the black hole nine years apart, as captured in archived data from 1996 and in a new, unprecedented 550-hour observation from 2005.

Black hole regions are notoriously chaotic, generating light at a range of frequencies. Similarities seen nine years apart imply something very fundamental is producing a pair of observed frequencies, namely the warping of space and time predicted by Einstein but rarely seen in such detail.

Jeroen Homan of the Kavli Institute for Astrophysics and Space Research at MIT and his colleagues from the University of Michigan, Amsterdam University and MIT are presenting this result today at the annual meeting of the American Astronomical Society in Washington, D.C.

"The fact that we found the exact same frequency of X-ray oscillations nine years later is likely no coincidence," said Homan. "The black hole is still singing the same tune. The oscillations are created by a groove hammered into space-time by the black hole. This phenomenon has been suspected for a while, but now we have strong evidence to support it."

A black hole forms when a very massive star runs out of fuel. Without the power to support its mass, the star implodes and the core collapses to a point of infinite density. Black holes have a theoretical border called an event horizon. Gravity is so strong within the event horizon that nothing, not even light, can escape its pull. Outside the event horizon, light can still escape.

Homan's team -- which includes Jon Miller of the University of Michigan, Rudy Wijnands of Amsterdam University and Walter Lewin of MIT -- observed a region less than 100 miles from the event horizon of a black hole system called GRO J1655-40. Here, matter can orbit a black hole relatively stably, but occasionally it wobbles at certain precise frequencies. This is a direct result of how the black hole deforms space and time, a four-dimensional concept that Einstein called space-time.

The team observed GRO J1655-40 twice a day on average for eight months, for a total of more than 550 hours. Gas from a companion star was falling toward the black hole, heating to high temperatures and causing the entire region to glow in X-ray light.

During the long observation, the team uncovered fluctuations in the X-ray light, called quasi-periodic oscillations, or QPOs. These are thought to be from wobbling blobs of gas whipping around the black hole. The team observed QPOs at frequencies of 300 Hz and 450 Hz -- the same as those observed nine years ago. This was by far the longest observation of a black hole during an outburst. Previous observations have determined that GRO J1655-40 is about 6.5 times more massive than the sun.

"The precise frequencies are determined by the mass of the black hole and also by how fast it spins," said Miller. "Those measurements -- mass and spin -- have been difficult to obtain. Fortunately, we already have an estimate of the mass of this black hole. By understanding the behavior of matter so close to the black hole's edge, we can now begin to determine the spin and thus, for the first time, completely describe the black hole."

Making this detection possible, the team said, was the long and intensive observing program with the Rossi X-ray Timing Explorer, a unique and durable observatory launched on Dec. 30, 1995.

"Had we not observed in this way, we would probably not have detected the pair of QPOs again," said Wijnands. "We need time. X-ray light from black holes typically shows many types of fluctuations. Often we see black holes brighten and weaken a few times per second, but the rate at which this happens changes from day to day. What is so special about the fluctuations that we observed is not only that they are much faster than the ordinary fluctuations -- a few hundred times per second! -- but also that the rate of the fluctuations is exactly the same as when we last saw them, nine years ago."

For more information about this result, including images, visit http://tahti.mit.edu/blackhole.

A version of this article appeared in MIT Tech Talk on January 25, 2006 (download PDF).