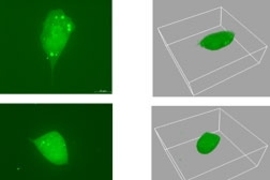 ↓ Download Image
Caption: Researchers tracked the movement of human prostate tumor cells, such as the one at left, in a 3-D matrix, right.
Credits: Image / Muhammad Zaman

Caption:
Researchers tracked the movement of human prostate tumor cells, such as the one at left, in a 3-D matrix, right.
Credits:
Image / Muhammad Zaman

New research at MIT may lead the pharmaceutical industry to take a whole new approach to battling the spread of cancer.

Cancer spreads when a cell breaks away from a primary tumor, settles in a new location and once again divides -- a process known as metastasis.

Pharmaceutical companies evaluating anti-cancer therapeutics typically use simplistic two-dimensional assays, or tests, to measure success in stopping metastasis. In these assays, cells crawl across the surface of a matrix, traveling in a single plane. A new MIT study indicates that this common approach for evaluating anti-cancer therapeutics misses some crucial phenomena.

Working in the labs of Whitehead member and MIT Professor Paul Matsudaira and MIT Professor Douglas Lauffenburger, postdoctoral researcher Muhammad Zaman discovered that cells move quite differently in three dimensions. His study, which focused on human prostate tumor cells, appeared the week of July 10 in the online early edition of Proceedings of the National Academy of Sciences.

"Two-dimensional assays ignore the obstacles that cells face in their natural contexts," said Zaman, who recently became an assistant professor at the University of Texas at Austin. "In 3-D, cells move through a thick jungle of fibers, or 'vines,' that hinder forward progress."

Cells must either squeeze through or chop up these putative vines to get anywhere. As a result, they move more slowly in three dimensions.

In an interesting twist, all cells need at least some vines to move, as they latch onto the "branches" with claw-like proteins called integrins and pull themselves forward. When Zaman disabled some of these claws, in a manner analogous to the workings of certain anti-cancer drugs, the cells moving across the top of the jungle canopy (in two dimensions) needed a greater number of vines to keep up their pace, while cells plowing through the jungle instead needed fewer vines to maintain the same speed.

This situation is further complicated in that the cells become dramatically sensitive to the stiffness of the vines when the integrins are disabled and consequently tend to squeeze through the vines rather than pushing them aside.

"Our findings help explain why two-dimensional assays for metastasis-inhibiting drugs do not effectively predict their effects in tissue," said Lauffenburger, who is head of MIT's Biological Engineering Division. He said he believes pharmaceutical companies will eventually use three-dimensional assays, accompanied by appropriate computational models such as one reported by Zaman in a 2005 paper, to determine how drugs affect metastasis.

But technology must improve before more complicated 3-D studies are attempted. For his 3-D study, Zaman worked with one sample at a time, using a special confocal microscope at the Whitehead-MIT BioImaging Center. The microscope divided each specimen into virtual slices, generating a new stack of images every 15 minutes.

"It took me about a year to get enough data because the microscope wasn't designed for high-throughput experiments," he said. Fortunately, the BioImaging Center has one of the most powerful sets of computers at MIT and the imaging processing and analysis went quite quickly.

"Muhammad was successful for two reasons," said Matsudaira, an MIT professor of biology and biological engineering. "His computational model predicted what would happen in virtual experiments and then he was able to go straight to test the predictions with these complicated 3-D experiments. As a result, the sophisticated models of cell movement enhance our understanding of key biological processes, including metastasis."