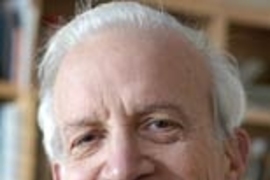 Professor Daniel Kleppner has won the 2005 Wolf Prize for physics for his groundbreaking work in atomic physics. The $100,000 prize was announced this week by the Israel-based Wolf Foundation Council.

For example, in 1960 Kleppner developed with Norman Ramsey the hydrogen maser, which was later used as an atomic clock of unprecedented stability. Applications of this early work range from coordination of radio-signals in long base-line radio astronomy to satellite-based global positioning systems.

Kleppner and colleagues also pioneered a whole new field of physics, the study of ultra-cold gases. They developed tools instrumental to the 1995 discovery of Bose-Einstein condensates (BECs) in alkali atoms by Eric Cornell, Carl Weiman and MIT's Wolfgang Ketterle. (The three shared the 2001 Nobel Prize in physics for that work.) BECs, which represent a new form of matter at the lowest temperatures ever achieved, are currently created under various forms in many laboratories around the world. Their study opens fascinating perspectives for applications in both fundamental and applied research.

In addition to his outstanding research achievements, Kleppner has been a dedicated teacher, advising many Ph.D. students who have gone on to attain prestigious positions in major universities. Kleppner, a statesman of science who is always willing to serve the common good, has served on numerous committees charged with investigating key scientific or social issues.

Wolf Prizes have been awarded since 1978 to outstanding scientists and artists "for achievements in the interest of mankind and friendly relations among peoples, irrespective of nationality, race, color, religion, sex or political view."

The prizes are given every year in four out of five scientific fields, in rotation (agriculture, chemistry, mathematics, medicine and physics), as well as an arts field.