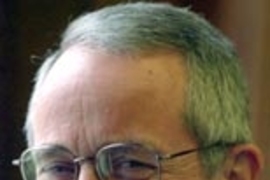 Former MIT President Charles M. Vest and his eight fellow members of the bipartisan Commission on the Intelligence Capabilities of the United States Regarding Weapons of Mass Destruction issued their final report to the president last week.

The commission concluded that U.S. intelligence agencies were "dead wrong" and their collected intelligence was "worthless or misleading" in reporting the presence in Iraq of nuclear, chemical or biological weapons of mass destruction.

More worrisome, the decentralized U.S. intelligence community still knows "disturbingly little" about the ability of terrorists or private networks to acquire or develop weapons of mass destruction, the report said.

Vest was named to the commission in early 2004, at which time he said, "This assignment is a call to major national service." Last week, Vest characterized the 618-page report as more than an inventory of intelligence failures, despite its searing criticism of the CIA in particular. The commission's work was intended to discern why "some intelligence efforts were successful and others terribly flawed, and then apply those lessons to improve intelligence going forward," he told The Tech.

The commission focused intently on Iraq and its biological and chemical weapons programs, used to justify the U.S. invasion of Iraq in March 2003. It concluded that Bush officials had been misled by flawed intelligence about Iraq and found no evidence that the administration had manipulated data or pressured anyone to do so.

The group also studied American intelligence in Libya, Iran, North Korea and Russia to assess its strengths and vulnerabilities generally.

While "disheartened" by its findings, the commission offered more than 50 specific recommendations for transforming the 15-agency intelligence community into a centralized, innovative and technologically agile resource for national defense.

President Bush appointed the commission a year ago. It is expected to be the last of a series of major investigations into prewar intelligence in Afghanistan and Iraq.

The commission's "prominent and recurring theme" was its call for "stronger and more centralized management of the intelligence community," echoing recommendations by previous studies.

As a result of the Intelligence Reform and Terrorist Prevention Act passed by Congress in late 2004, Bush appointed former Ambassador John Negroponte as the new director of national intelligence in February.

The commission's report, a stylistically accessible document, takes a rueful tone on his appointment. Negroponte will have "broad responsibilities but only ambiguous authorities" over intelligence, the commission said.

The "headstrong" Pentagon and CIA and an insular intelligence culture will require more than regime change at the top, it says.

"Reform must rise from the bottom too, and it must involve true cultural change within the Community â€¦ At every level, new and better ways of doing business should be encouraged, nurtured, and protected," it says.

A version of this article appeared in MIT Tech Talk on April 6, 2005 (download PDF).