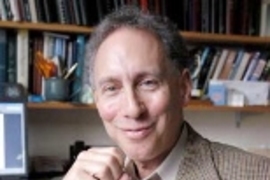 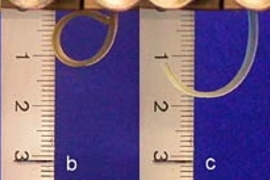 ↓ Download Image
Caption: A sample of "smart" plastic (a) is elongated and irradiated on the right-hand side with ultraviolet light, forming a temporary shape (b). Photos (c) and (d) show the plastic recovering its original shape after exposure to UV light of a different wavelength. Scale is in centimeters.
Credits: Photo / GKSS Research Center

Picture a flower that opens when facing the sunlight. In work that mimics that sensitivity to light, an MIT engineer and his German colleagues have created the first plastics that can be deformed and temporarily fixed into shape by light.

These programmed materials change shape when struck by light at certain wavelengths and return to their original shapes when exposed to light of specific different wavelengths.

The discovery, to be reported in the April 14 issue of Nature, could have potential applications in a variety of fields, including minimally invasive surgery. Imagine, for example, a "string" of plastic that a doctor could thread into the body through a tiny incision. When activated by light via a fiber-optic probe, that slender string might change into a corkscrew-shaped stent for keeping blood vessels open.

What about staples that open at a flash, or paper clips that relax when you don't need them anymore? Again, light could do the job.

"This is really a new family of materials that can change from one shape to another by having light shined on them," said Institute Professor Robert Langer of MIT.

Langer co-authored the paper with Andreas Lendlein, Hongyan Jiang and Oliver JÃ¼nger. Lendlein, a former MIT visiting scientist, is institute director at the GKSS Research Center in Teltow, Germany. With Jiang and JÃ¼nger, he is also affiliated with the Institute for Technology and Development of Medical Devices at Rheinisch-WestfÃ¤lische Technische Hochschule (RWTH) Aachen University in Germany.

Plastics with "shape-memory"--ones that change shape in response to a temperature increase--are well known. In 2001, Langer and Lendlein were the first to report biodegradable versions of these materials in the Proceedings of the National Academy of Sciences.

A year later, the researchers introduced thermoplastic, biodegradable shape-memory polymers and demonstrated a nifty medical application--a smart suture that ties itself into the perfect knot. That work was described in the journal Science; mNemoscience GmbH of Aachen, Germany, was developed to commercialize the discovery.

"Now instead of heat, we can induce the shape-memory effect in polymers with light," said Lendlein.

Key to the work: "molecular switches," or photosensitive groups that are grafted onto a permanent polymer network. The resulting photosensitive polymer film is then stretched with an external stress and illuminated with ultraviolet light of a certain wavelength. This prompts the molecular switches to crosslink, or bind one to another.

The result? When the light is switched off and the external stress released, the crosslinks remain, maintaining an elongated structure. Exposure to light of another wavelength cleaves the new bonds, allowing the material to spring back to its original shape.

The team notes that in addition to elongated films, a variety of other temporary shapes can be produced. For example, a spiral can be created by exposing only one side of the stretched sample to light. So "while the deformation is well-fixed for [the irradiated] side, the other side keeps its elasticity. As a result, one contracts much more than the other when the external stress is released, forming an arch or corkscrew spiral shape," the authors write.

The team has also shown that the temporary shapes are "very stable for long times even when heated to 50 degrees C."

"In our Nature paper, the basic principle of photo-induced shape-memory polymers is explained. We are currently developing medical and industrial applications using their photosensitivity," Lendlein said.

The work was funded in part by a BioFuture Award from the Bundesministerium fÃ¼r Bildung und Forschung, Germany, and a fellowship from the Alexander von Humboldt Foundation.