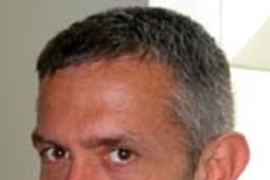 Pomiecko, known as Chris, was a native of Claremont, N.H., and a resident of Dorchester, Mass. He came to MIT in 1984 and joined the Comparative Media Studies Program (CMS) as administrator in 1999.

He quickly made his mark among colleagues and students at CMS as a welcoming presence, effective organizer and steadfast supporter of the lesbian, bisexual, gay and transgendered community (LBGT). For incoming students, Pomiecko's was the face of MIT.

Anita Chan, a graduate student in the Program in Science, Technology and Society and former CMS student, said, "As a new graduate student four and a half years ago, I wondered if I would ever feel at home. Chris turned the campus into a family for me. His wit and his commitment to the students was a reminder to me of the wonderful, dynamic humanity of the campus."

Parmesh Shahani, a graduate student in CMS from India, recalled Pomiecko's kindness as his "first point of contact at MIT."

"He helped me transition to life in the U.S. He encouraged me tremendously when I told him about the LBGT film festival I wanted to organize at MIT. Some of my best moments at MIT have been spent in his office," Shahani said.

Pomiecko's colleagues noted his generosity, included sharing his interests and hobbies. He was known for enjoying restoring his Dorchester home and for the delight he took in gardening, tennis, swimming, cross-country skiing and photography. Bridge, his friends knew, was his passion. He held weekly games at his home and traveled to games around Boston and in New Hampshire.

Michele Oshima, director of student and artist-in-residence programs in the Office of the Arts, took up the game thanks to Pomiecko's persistence that she learn, she said. "He was the anchor of the LBGT bridge community, a circle of funny, intelligent, competitive players," she said.

"Chris made me laugh and put things into perspective. I will miss his sarcasm, wit and his generosity. He was right--all work and no play is unhealthy," Oshima said.

An enthusiastic and devoted uncle to his two nieces, Sophia and Natalya Martins, Pomiecko recently combined his love for them and his love for movies in a Christmas Eve outing to see the film, "Lemony Snicket's A Series of Unfortunate Events."

Pomiecko attended Middlebury College and McGill University, graduating in 1980. He worked as a freelance journalist before moving to Boston.

He is survived by his mother, Hazel (Fortin) Pomiecko, of Claremont; his sister Catherine, brother-in-law George Martins, and nieces Sophia and Natalya, all of Natick, Mass.; and an uncle and aunt, Donald and Joan Fortin of Ft. Myers, Fla., and Eastman, N.H. His father, Victor Pomiecko, died in 1996.

A wake will be held at the Stringer Funeral Home at 146 Broad St., Claremont, N.H., on Friday, Feb. 11. from 6 to 8 p.m. A funeral mass will be said Saturday morning at St. Mary's Church in Claremont at 11 a.m. Interment will follow at St. Mary's Cemetery.

In lieu of flowers, the family asks that donations be made to the Fiske Free Library, St. Mary's Elementary School or the Claremont Opera House, all of Claremont, or any other charity.

A version of this article appeared in MIT Tech Talk on February 16, 2005 (download PDF).