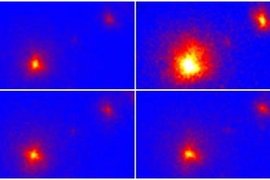 ↓ Download Image
Caption: The X-Ray Imaging Spectrometer observatory recently took these images of a galaxy cluster (one for each of four cameras and telescopes key to the device).
Credits: Image courtesy / Mark Bautz, MIT 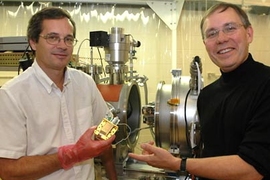 Caption:
The X-Ray Imaging Spectrometer observatory recently took these images of a galaxy cluster (one for each of four cameras and telescopes key to the device).
Credits:
Image courtesy / Mark Bautz, MIT

X-ray cameras designed by MIT astrophysicists are a key component of a new instrument aboard an orbiting Japanese observatory that will probe the secrets of such phenomena as exploding stars.

Recently MIT's team was overjoyed -- and relieved -- when the instrument, the X-ray Imaging Spectrometer (XIS), took its first pictures, flawlessly capturing the image of an exploded star in the Small Magellanic Cloud. Only a few weeks earlier, one of the other two instruments on the observatory, known as Suzaku, had failed.

For a little while Mark Bautz, leader of the MIT team, also feared the worst for XIS. He and colleagues had returned home from Japan, where they had activated their instrument, but were awaiting the final step -- the opening of the Japanese-built protective covers -- before the cameras could start taking images of the sky.

At 2 a.m. one August morning, Bautz waited in Boston for news of whether that step was successful. "I was trading instant messaging with my Japanese colleagues right up until the commands were sent [to open the covers], and then all of a sudden they stopped responding," said the principal research scientist at MIT's Kavli Institute for Astrophysics and Space Research. "I knew we had only a five-minute window, so it wasn't long before I was convinced it hadn't worked."

Half an hour later, the good news finally appeared on his screen. "Turns out they were so excited the instrument worked that they forgot to let me know," said Bautz.

Although humans may revel in the bright hues of a rainbow or the flash of a colorful bird, we are blind to a host of other phenomena because they radiate light, like X-rays, that our eyes can't detect. "It turns out that almost everything you see in the sky emits X-rays as well, so you can learn a lot about an object by taking X-ray images," Bautz said.

Enter Suzaku, the latest observatory to explore the X-ray sky. MIT has also been involved in past X-ray expeditions including the High-Energy Transient Explorer (HETE-2), the Chandra X-Ray Observatory and the Advanced Satellite for Cosmology and Astrophysics (ASCA).

The XIS aboard Suzaku is composed of the four cameras developed by MIT plus four telescopes developed at NASA's Goddard Space Flight Center that focus the sky onto the cameras. The cameras send the images back to Earth.

The researchers hope to learn more about such phenomena as supernovas (exploding stars) and clusters of galaxies so massive that they trap clouds of hot gas that emit X-rays.

In conjunction with another instrument aboard Suzaku, the XIS will also help scientists study the emission processes near black holes. "There's a nice synergy there because our instrument covers X-rays at very low energies, while the other instrument goes to very high energies. Together they'll help us put together the entire X-ray spectrum coming from matter just outside a black hole," Bautz said.

In addition to MIT and NASA, other institutions involved in XIS are the Institute of Space and Astronomical Sciences of the Japanese Aerospace Exploration Agency, Osaka University and Kyoto University.

The Suzaku mission is a collaboration between the Japan Aerospace Exploration Agency and NASA.