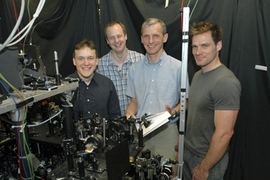 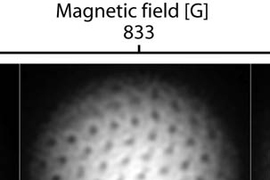 ↓ Download Image
Caption: The rotating superfluid gas of fermions is pierced with the vortices, which are like mini-tornadoes.
Credits: Image / Andre Schirotzek, MIT 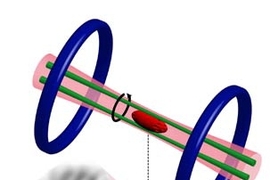 ↓ Download Image
Caption: In the top portion of this illustration, the gas of fermions (red) is trapped in an infrared laser beam (pink) and held in place by a magnetic field generated by current-carrying coils (blue). Two additional laser beams, shown in green, were used like coffee stirrers to set the gas into rotation. The result, as illustrated below, could be seen in a shadow picture of the expanded cloud that showed its superfluid behavior: The gas was pierced by a regular array of vortices.
Credits: Image / Andre Schirotzek, MIT

Caption:
The rotating superfluid gas of fermions is pierced with the vortices, which are like mini-tornadoes.
Credits:
Image / Andre Schirotzek, MIT

Caption:
In the top portion of this illustration, the gas of fermions (red) is trapped in an infrared laser beam (pink) and held in place by a magnetic field generated by current-carrying coils (blue). Two additional laser beams, shown in green, were used like coffee stirrers to set the gas into rotation. The result, as illustrated below, could be seen in a shadow picture of the expanded cloud that showed its superfluid behavior: The gas was pierced by a regular array of vortices.
Credits:
Image / Andre Schirotzek, MIT

CAMBRIDGE, Mass. -- MIT scientists have brought a supercool end to a heated race among physicists: They have become the first to create a new type of matter, a gas of atoms that shows high-temperature superfluidity.

Their work, to be reported in the June 23 issue of Nature, is closely related to the superconductivity of electrons in metals. Observations of superfluids may help solve lingering questions about high-temperature superconductivity, which has widespread applications for magnets, sensors and energy-efficient transport of electricity, said Wolfgang Ketterle, a Nobel laureate who heads the MIT group and who is the John D. MacArthur Professor of Physics as well as a principal investigator in MIT's Research Laboratory of Electronics.

Seeing the superfluid gas so clearly is such a dramatic step that Dan Kleppner, director of the MIT-Harvard Center for Ultracold Atoms, said, "This is not a smoking gun for superfluidity. This is a cannon."

For several years, research groups around the world have been studying cold gases of so-called fermionic atoms with the ultimate goal of finding new forms of superfluidity. A superfluid gas can flow without resistance. It can be clearly distinguished from a normal gas when it is rotated. A normal gas rotates like an ordinary object, but a superfluid can only rotate when it forms vortices similar to mini-tornadoes. This gives a rotating superfluid the appearance of Swiss cheese, where the holes are the cores of the mini-tornadoes. "When we saw the first picture of the vortices appear on the computer screen, it was simply breathtaking," said graduate student Martin Zwierlein in recalling the evening of April 13, when the team first saw the superfluid gas. For almost a year, the team had been working on making magnetic fields and laser beams very round so the gas could be set in rotation. "It was like sanding the bumps off of a wheel to make it perfectly round," Zwierlein explained.

"In superfluids, as well as in superconductors, particles move in lockstep. They form one big quantum-mechanical wave," explained Ketterle. Such a movement allows superconductors to carry electrical currents without resistance.

The MIT team was able to view these superfluid vortices at extremely cold temperatures, when the fermionic gas was cooled to about 50 billionths of one kelvin, very close to absolute zero (-273 degrees C or -459 degrees F). "It may sound strange to call superfluidity at 50 nanokelvin high-temperature superfluidity, but what matters is the temperature normalized by the density of the particles," Ketterle said. "We have now achieved by far the highest temperature ever." Scaled up to the density of electrons in a metal, the superfluid transition temperature in atomic gases would be higher than room temperature.

Ketterle's team members were MIT graduate students Zwierlein, Andre Schirotzek, and Christian Schunck, all of whom are members of the Center for Ultracold Atoms, as well as former graduate student Jamil Abo-Shaeer.

The team observed fermionic superfluidity in the lithium-6 isotope comprising three protons, three neutrons and three electrons. Since the total number of constituents is odd, lithium-6 is a fermion. Using laser and evaporative cooling techniques, they cooled the gas close to absolute zero. They then trapped the gas in the focus of an infrared laser beam; the electric and magnetic fields of the infrared light held the atoms in place. The last step was to spin a green laser beam around the gas to set it into rotation. A shadow picture of the cloud showed its superfluid behavior: The cloud was pierced by a regular array of vortices, each about the same size.

Bose-Einstein condensation of pairs of fermions that were bound together loosely as molecules was observed in November 2003 by independent teams at the University of Colorado at Boulder, the University of Innsbruck in Austria and at MIT. However, observing Bose-Einstein condensation is not the same as observing superfluidity. Further studies were done by these groups and at the Ecole Normale Superieure in Paris, Duke University and Rice University, but evidence for superfluidity was ambiguous or indirect.

The superfluid Fermi gas created at MIT can also serve as an easily controllable model system to study properties of much denser forms of fermionic matter such as solid superconductors, neutron stars or the quark-gluon plasma that existed in the early universe.

The MIT research was supported by the National Science Foundation, the Office of Naval Research, NASA and the Army Research Office.