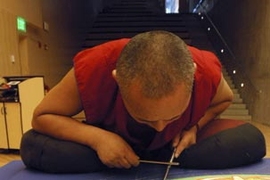 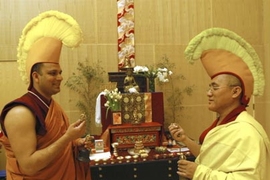 Caption:
Lama Dhondup Tsering, a Buddhist monk, works painstakingly Monday to create a sand mandala at Simmons Hall. It will be on view through Saturday.
Credits:
Photo / Donna Coveney

Painstakingly created grain by grain, the 4-foot Vajrasattva Sand Mandala was completed yesterday at Simmons Hall in a Buddhist ritual intended to form a physical expression of insight, awareness and altruism.

MIT's Buddhist chaplain, Tenzin (Tibetan for "Holder of Dharma") L.S. Priyadarshi, worked with Lama Dhondup Tsering, a Buddhist monk trained at the Gyuto Tantric College in India, to create the mandala, which they started on Saturday, April 2.

Buddhists use the visual and aural to try to condition the mind, to become aware of thoughts ("In any one moment, we have 3,000 thoughts in our mind," Priyadarshi said), to filter them down, and finally to manifest the good thoughts in speech or action.

The image at Simmons Hall focuses on the cosmic Buddha of insight and purification, according to Priyadarshi, who said that each of the many different mandala images in the tradition first appeared as an internal visualization to someone meditating on specific qualities.

"What appeared in the mind, we try to re-create," he said. Buddhists believe that the creation of the mandala as a three-dimensional object brings those qualities into being.

The emphasis of this particular mandala, Priyadarshi said, "is altruism as a compassionate activity--not pity, not charity. Such altruistic activity enables us to see everything as equal." Priyadarshi will give a talk on Vajrasattva and the mandala tomorrow (April 7) at 7 p.m. in Simmons Hall.

Priyadarshi, who lives at Simmons Hall as a resident scholar and chaplain, says he believes that an emphasis on clear and lucid understanding and calmness can help MIT students in whatever path they choose.

"We are not looking for more Buddhists," the monk said with a smile. "The Buddhist community at MIT comprises people from many religions; they don't need to convert to be part of this community. As a chaplain, I am here to help them in their spiritual and mental growth."

Priyadarshi may be uniquely suited to bridge any religious gaps. As a 10-year-old boy he ran away from a Brahmin Hindu home on a spiritual quest to satisfy his intuitive longing for Buddhism. At his parents' request, he agreed to continue his secular education in a Christian school, but split his teenage years between a Buddhist monastery and a Hindu ashram. Later he studied physics in a U.S. Jesuit college and in 2003, obtained a master's degree in comparative religion from Harvard Divinity School. The 25-year-old has been a chaplain at MIT for three years.

This week Priyadarshi offers a number of Buddhist-oriented events, including creation of the second sand mandala at Simmons Hall, a talk on "Awakening Bliss, Generating Compassion" by author Robert Thurman, and a mandala workshop for children.

Priyadarshi and Dhondup later will sweep the sand into vessels and pour it into the Charles River, signifying the flow of insight, awareness and altruism throughout the world.

The mandala is displayed in the Simmons Hall Common Room, accompanied by recorded chants, "to calm the mind with sight and sound," said Priyadarshi. Public viewing hours are 10:30 a.m. to 2 p.m. and 4 to 7:30 p.m. through April 8, and on April 9 from 10 a..m. until 3 p.m., when the mandala will be swept away.

A version of this article appeared in MIT Tech Talk on April 6, 2005 (download PDF).