Vacant looks could be Eureka! moments 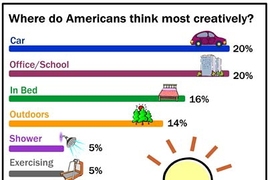 Nearly 20 percent of American adults say they think most creatively in their cars, according to the 2005 Lemelson-MIT Invention Index study, which gauges Americans' attitudes toward invention and innovation. So don't think of your commute as being stuck in bumper-to-bumper traffic; think of it as a potential breeding ground for your next creative breakthrough.

"Many Americans feel they spend half their lives in the car, but we were surprised by just how many people felt their daily commute was conducive to creative thinking," said Lemelson-MIT Program Director Merton Flemings. "But when you stop to think about it, it makes sense. Daily commutes in this country are getting longer each year and the car may be one of the last environments in which we can escape from our over-stimulated lives and just be alone with our thoughts."

Other settings that fared well in the Lemelson-MIT Invention Index were workplaces and schools (20 percent); in bed while falling asleep, waking up or dreaming (16 percent); and outdoors (14 percent). Respondents also cited bathing or showering (5 percent) and exercising (5 percent) as conducive to creativity.

By contrast, watching television (2 percent) and listening to music (1 percent) were the least likely to lead to creative thoughts.

"Television has an important place in our culture," Flemings commented. "However, our society faces significant challenges that will require fresh and imaginative ideas. Young people, especially, need to gain real-world experiences and be exposed to environments that are conducive to creative thought. That means turning off the TV every so often."