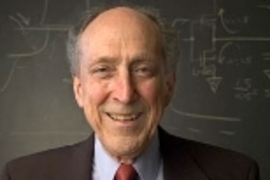 Proving that a little chip can go a long way, Robert Dennard will receive the $100,000 Lemelson-MIT Lifetime Achievement Award for having come up with a way to arrange transistors and capacitors onto a single silicon chip.

His invention--dynamic random access memory or DRAM--transformed the microelectronics industry in the early 1970s and today is still the most popular form of computer memory.

Dennard will receive the award in a ceremony at the Oregon Museum of Science and Industry in Portland, Ore., on April 22.

"Dr. Dennard's technical innovations led the way from bulky room-sized computers to the 'portable age' of cellular phones and laptop computers," said Merton Flemings, director of the Lemelson-MIT Program and the Toyota Professor Emeritus in MIT's Department of Materials Science and Engineering.

"It is truly unusual in a field moving as rapidly as semiconductor technology to have an invention endure over three decades, but there is still no technology on the horizon to replace the single-transistor DRAM cell," Gordon Moore, co-founder and chairman emeritus at Intel, wrote in his recommendation letter for Robert Dennard.

Before Dennard created the DRAM cell at IBM in 1967, technology companies had been using magnetic memory and were running into problems extending its use. DRAM was much smaller, required less power and cost less.

The first commercial DRAM chips were introduced in the 1970s. Today's chips can hold up to a billion bits of information and provide the RAM function in all computers from laptops to supercomputers. DRAM is used in pervasive applications from communications network switches to digital cameras.

"I'm often asked if I could foresee how important (DRAM) would become," said Dennard. "I knew it was going to be a big thing, but I didn't know it would grow to have the wide impact that it has today."

In the early 1970s, Dennard and his team at IBM had another significant breakthrough. Technology companies were struggling with whether bipolar-transistor-based integrated circuits were the ideal building blocks of high-performance electronics. Dennard thought the metal-oxide field effect transistor (MOSFET) offered a better alternative because of its amenability to large-scale integration with high density and good yield.

He and his team developed a scaling theory, demonstrating that if all dimensions of a MOSFET device were reduced simultaneously, along with proportional changes in operating voltage and the silicon doping concentration, they could continue to make smaller and smaller devices that performed better, required less power, were denser and less expensive.

"Dennard's development of scaling theory has been a driving force in microelectronics," wrote Nicholas Donofrio, IBM senior vice president of technology and manufacturing, in his recommendation letter.

Dennard's paper devoted to this theory is universally referenced as a guide to designing devices down to submicron dimensions. Throughout his career, his work has resulted in 35 patents, nearly 90 published technical papers and numerous awards, including the National Medal of Technology.

According to Dimitri A. Antoniadis, the Ray and Maria Stata Professor of Electrical Engineering at MIT, the most relevant inventions underlying modern computing are the integrated circuit, the MOSFET, the one-transistor DRAM cell and the magnetic disk.

"I believe that this puts into perspective the great significance of Dennard's contributions to his industry and more importantly to society at large," Antoniadis said.