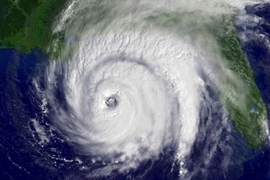 Hurricanes have grown significantly more powerful and destructive over the last three decades due in part to global warming, says an MIT professor who warns that this trend could continue.

"My results suggest that future warming may lead to an upward trend in [hurricanes'] destructive potential, and--taking into account an increasing coastal population--a substantial increase in hurricane-related losses in the 21st century," reports Kerry Emanuel in a paper appearing in the July 31 online edition of the journal Nature.

Emanuel is a professor of meteorology in MIT's Department of Earth, Atmospheric and Planetary Sciences.

Theories and computer simulations of climate indicate that warming should generate an increase in storm intensity. In other words, they should hit harder, produce higher winds and last longer.

To explore that premise, Emanuel analyzed records of tropical cyclones--commonly called hurricanes or typhoons--since the middle of the 20th century. He found that the amount of energy released in these events in both the North Atlantic and the North Pacific oceans has increased markedly since the mid-1970s. Both the duration of the cyclones and the largest wind speeds they produce have increased by about 50 percent over the past 50 years.

He further reports that these increases in storm intensity are mirrored by increases in the average temperature at the surface of the tropical oceans, suggesting that this warming--some of which can be ascribed to global warming--is responsible for the greater power of the cyclones.

According to Jay Fein, director of the National Science Foundation's climate dynamics program, which funded the research, Emanuel's work "has resulted in an important measure of the potential impact of hurricanes on social, economic and ecological systems. It's an innovative application of a theoretical concept, and has produced a new analysis of hurricanes' strength and destructive potential."