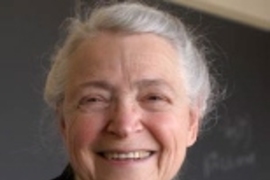 Institute Professor Mildred Dresselhaus has won the 11th Heinz Award for Technology, the Economy and Employment in recognition of scholarship that has helped keep the United States on the cutting edge of nanostructures and other technologies.

Dresselhaus, an advocate for increased opportunities for women in the sciences for more than four decades, is among five distinguished Americans selected to receive the $250,000 awards, presented in five categories by the Heinz Family Foundation.

"Throughout her career, Dr. Mildred Dresselhaus has combined significant scientific accomplishments and prominent leadership roles with an abiding commitment to support the advancement of women in the sciences," said Teresa Heinz Kerry, chairman of the Heinz Family Foundation.

"Amid public debate over the capacity of women to thrive in a scientific environment, Dr. Dresselhaus' esteemed career provides a decisive and resounding answer. Her quiet leadership, serving as a generous mentor and role model to countless women over the years, has had a profound impact on the scientific opportunities that are available to women today. We are pleased to recognize her life's work with the Heinz Award for Technology, the Economy and Employment."

Said Dresselhaus, "Among my greatest satisfactions--in addition to a marriage of 47 years and the raising of four wonderful children--has been empowering the young women who have been inspired to pursue a scientific calling. I hope that this award will provide additional inspiration, and I thank the Heinz Family Foundation for this tremendous honor."

A native of the Bronx, where she showed an early aptitude for the violin, Dresselhaus shifted focus in college from music to physics. Following her doctoral work at the University of Chicago, she focused her initial research on solid-state physics and superconductivity. In 1960, she and her husband, physicist Gene Dresselhaus, moved to MIT, where they remain.

Dresselhaus is one of the nation's foremost experts in the multifaceted field of carbon science. Her investigations into superconductivity, the electronic properties of carbon, thermoelectricity and the new physics at the nanometer scale have helped yield numerous scientific discoveries.

She has lectured around the world, written extensively about her research and served in prominent leadership roles, including as director of the office of science at the U.S. Department of Energy during the Clinton administration; as president of the American Physical Society; and as president of the American Association for the Advancement of Science. Among her numerous honors is the National Medal of Science, which she received from President Bush in 1990. She has 16 honorary degrees from various colleges and universities.

The mother of four faced unique challenges in the workplace, which perhaps provided the inspiration to assist other women pursue scientific careers. In 1970 she co-founded the Women's Forum at MIT--established to equalize opportunities for all women at MIT--and received a Carnegie Foundation grant to encourage women's study of traditionally male-dominated fields, such as physics. She also became the Abby Rockefeller Mauze chair, endowed in support of the scholarship of women in science and engineering.

When Dresselhaus arrived at MIT in 1960, women comprised just 4 percent of the student population; the percentage of women today is 40 percent.

Since 1993, the Heinz Family Foundation of Pittsburgh has recognized individuals whose dedication, skill and generosity of spirit represent the best of the human condition--qualities that the late Sen. John Heinz (R-Pa.), for whom the award is named, held so dear. The Heinz Awards will be presented at a private ceremony in Washington, D.C., on May 24.

A version of this article appeared in MIT Tech Talk on May 4, 2005 (download PDF).