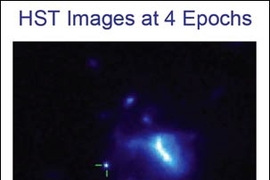 An international team of astronomers led by MIT announced Oct. 5 that it has solved the mystery of the origin of short gamma-ray bursts, violent cosmic events marking the explosive collision of two compact stars.

In a paper to appear in the Oct. 6 issue of Nature, the scientists describe how they used NASA's High Energy Transient Explorer (HETE) satellite to make the initial discovery. Accompanying papers by Danish-led and Penn State University-led teams describe follow-up observations of the HETE-discovered event using ground-based telescopes, as well as the Chandra X-ray Observatory and Hubble Space Telescope.

At a NASA press conference held yesterday at 1 p.m., George R. Ricker, senior research scientist of the MIT Kavli Institute for Astrophysics and Space Research, announced the HETE results for the first time.

Gamma ray bursts (GRBs) are the biggest explosions since the Big Bang. Astronomers are fairly certain that typical long GRBs lasting several seconds are caused by the collapse of massive stars, signaling the birth of black holes. Dimmer, short GRBs lasting only milliseconds had been one of the biggest mysteries in high-energy astronomy: How far away were they? What caused them?

A team led by MIT's Ricker discovered a short GRB, designated GRB050709, lasting only 70 milliseconds on July 9. "This particular short burst provides a long-sought nexus, enabling detection of the prompt emission and its afterglow, from the gamma-ray band to the optical, for the very first time," said Ricker.

HETE's accurate localization of the burst allowed other telescopes to identify the burst's X-ray afterglow, and, for the first time, its optical afterglow, which provided the clues needed to track the burst to its host galaxy. The distinctive signature is that of two neutron stars or a neutron star and a black hole merging, followed by a colossal explosion. The collision happened about 2 billion years ago, creating an energy show so brilliant that we can witness it eons later. "The carefully orchestrated observations by three powerful NASA scientific satellites -- HETE, Chandra, and Hubble -- were essential in making this important discovery," Ricker said.

Neutron stars are stellar corpses -- the collapsed, compact remnants of supernova explosions. Half a million Earth masses of matter condensed into a sphere just 10 miles across, neutron stars are incredibly dense. One teaspoonful weighs 5 billion tons.

Usually loners, neutron stars in rare instances are born in pairs. Over hundreds of millions or billions of years, the partners start to spiral toward each other at velocities eventually verging on the speed of light, whipping around each other thousands of times a second in a mad dash toward a crash so violent the explosion releases more energy than 1,000 trillion suns.

The two objects implode in a cataclysmic one-hundredth of second, forming a black hole. Although black holes suck up light and anything else that might have made them visible to astronomers, just before black holes are formed, space flotsam and jetsam are flung off in superheated gas jets. These twin, narrow jets, aiming in opposite directions, carry off tremendous amounts of energy. If one of these jets points to Earth, we see it as a burst of gamma rays.

Gamma ray bursts were first detected in the 1960s by U.S. military satellites sleuthing out stray gamma rays potentially tied to putative illegal Soviet nuclear testing in space. Remarkably, the energetic events turned out to be natural phenomena. In the early 1990s, astronomers realized there were two kinds of gamma-ray bursts -- short and long. While it now appears that both short and long GRBs are tied to the creation of black holes, the relative proximity of short GRBs may help solve another mystery.

If a short GRB is due to merging neutron stars, then it should produce powerful bursts of gravitational radiation. Although Albert Einstein included gravitational waves in his 1916 general theory of relativity, these waves have never been measured directly. Short GRB sources, 10 times closer to Earth than long GRBs, likely emit gravitational waves that will be detectable for the first time by the second-generation Laser Interferometry Gravitational-wave Observatory (LIGO), in which both Caltech and MIT are major participants.

"The unique scientific discoveries that HETE continues to make and its very low operating cost are important reasons for continuing HETE satellite operations in future years," Ricker said. NASA funding for the period beyond December is in doubt, despite pledges of matching support by HETE's international partners. The HETE spacecraft and dedicated international ground network continue to operate reliably and efficiently. All three of its science instruments continue to work well. Thirty-one of 81 HETE localizations have led to detection of an X-ray, optical or radio afterglow, said Ricker.

The HETE satellite was designed and constructed by MIT under the NASA Explorer Program. Ricker serves as the principal investigator for the overall mission. The HETE program is a collaboration among MIT; NASA; Los Alamos National Laboratory, New Mexico; France's Centre National d'Etudes Spatiales (CNES), Centre d'Etude Spatiale des Rayonnements (CESR) and Ecole Nationale Superieure del'Aeronautique et de l'Espace (Sup'Aero); and Japan's Institute of Physical and Chemical Research (RIKEN). The science team includes members from the University of Chicago and the University of California (Berkeley and Santa Cruz), as well as from Brazil, India and Italy. The HETE research program is supported in the United States by NASA.