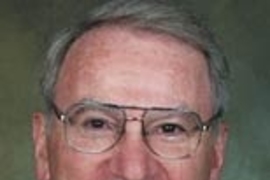 Irwin M. Jacobs, a leader in the wireless telecommunications industry and a staunch advocate for improving math and science education in the United States, will give the Commencement address at MIT's graduation ceremony on Friday, June 3. Jacobs is an MIT alumnus (S.M. 1957 and Sc.D. 1959) and former faculty member in electrical engineering (1959-1966).

Jacobs is co-founder, chairman and CEO of Qualcomm Inc. He is known as an innovative entrepreneur and engineer who places high value on research. Qualcomm holds nearly 1,400 patents and has more than 2,000 patents pending; the San Diego-based company has been compared to a think-tank with thousands of employees. Its digital wireless communications technology (CDMA--Code Division Multiple Access) is among the most widely used in the world.

"The extraordinary technological contributions of Irwin Jacobs have transformed global telecommunications. Dr. Jacobs' career, which began with graduate study and a first faculty position at MIT, has changed countless lives, not only through invention and entrepreneurship, but also through remarkable support of secondary math and science education, and of the arts," said MIT President Susan Hockfield. "We are honored and delighted that he is returning to MIT to inspire our graduates and their families, and to share his unique perspective on technology and education."

Jacobs and his wife, Joan, have made appreciable contributions to science and math education and the arts through their philanthropic work. The engineering school at the University of California at San Diego is named after them--The Jacobs School of Engineering--and last year, Qualcomm and the Jacobs made a $14.5 million gift to San Diego State University to establish the Qualcomm Institute of Innovation and Educational Success and to help launch the National Center for Urban School Transformation at SDSU. These two institutions aim to make the United States more competitive in math and science through improving education in all grades: kindergarten through graduate school. The Jacobs have made generous contributions to the La Jolla Playhouse and the San Diego Symphony as well.

Their son, Gary, has taken on the mantle of math and science education as well, and was involved in establishing and funding High Tech High, an innovative school in San Diego where students spend much of their time working on group projects in science and engineering. The school also places an emphasis on arts. Using contributions from the Bill and Melinda Gates Foundation, Gary Jacobs is replicating that concept in other places, including at the New Bedford Global Learning Charter School in New Bedford, Mass., Irwin Jacobs' hometown.

At the August 2004 announcement of the gift to San Diego State University, Jacobs told the audience that his high school guidance counselor at New Bedford told him there was no future in science and engineering. So, young Jacobs enrolled in hotel management at Cornell, although he switched to electrical engineering and took the S.B. in 1956 before coming to MIT for graduate school.

Jacobs was on the MIT faculty from 1959-1966. He later co-founded Linkabit, the company credited with having created much of the digital communications industry through spinoffs, with Andrew Viterbi (S.B. 1956, S.M. 1957). The two sold Linkabit to M/A-Com and founded Qualcomm in 1985.

Jacobs left MIT to become associate professor of computer science and engineering at UCSD in 1966, in part because of the lower cost of housing in San Diego, he said. While teaching at MIT, he co-authored with Professor John Wozencraft "Principles of Communication Engineering," a textbook in digital communications still in use today.

The recipient of numerous awards, Jacobs was honored with the 1992 Entrepreneur of the Year Award from the Institute of American Entrepreneurs, the National Medal of Technology in 1994, the 1998 Medal of Achievement from the American Electronics Association, the 1999 Ernst & Young Leadership Award for Global Integration, the Bower Award in Business Leadership from the Franklin Institute in 2001, and election as fellow of the American Academy of Arts and Sciences in 2001.

Jacobs announced last month that he will step down as CEO of Qualcomm on July 1, but remain as chairman. His son, Paul, will become CEO.

MIT's 139th Commencement exercises--the first for President Hockfield, who took office in December 2004--will be held in Killian Court on the morning of June 3. The ceremony will be televised on MIT Cable TV.

A version of this article appeared in MIT Tech Talk on April 13, 2005 (download PDF).