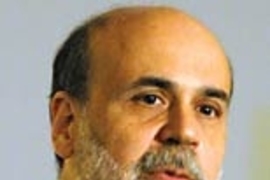 An MIT-educated economist whom President Bush has designated to serve as chairman of the Federal Reserve will be MIT's 140th Commencement speaker on Friday, June 9, 2006, in Killian Court.

Ben S. Bernanke (Ph.D. 1979) currently serves as chairman of the President's Council of Economic Advisors. If approved by the Senate, Bernanke will succeed Alan Greenspan, Fed chairman since 1987, early next year.

In making the announcement, MIT President Susan Hockfield said, "I am very excited that Ben Bernanke will be MIT's Commencement speaker next June. His career, in the academy and in government, has exemplified values that are central to MIT -- personal integrity, analytical rigor, an uncompromising drive toward excellence and a commitment to public service -- and I can think of no one who can better inspire our new graduates to use their talents to serve the nation and the world.

"Bernanke's presence at the podium will have a special resonance given MIT's role as a wellspring of innovation in today's knowledge-based economy."

Eric Grimson, head of the Department of Electrical Engineering and Computer Science, served as chair of the 2006 Commencement Committee, composed of faculty, students and members of the administration.

Grimson described Bernanke as an "excellent choice as Commencement speaker. As the recently appointed chairman of the Federal Reserve, he serves an extremely important and influential role in the U.S. economy. As an MIT graduate, he provides a wonderful role model to our current students, demonstrating that graduates from MIT can have influential roles outside of the technical arena.

"Indeed, MIT graduates are desperately needed in such roles, using the abilities they gained at MIT as critical and analytic thinkers and problem solvers to influence the broader U.S. community," Grimson said.

Bernanke, 52, grew up in Dillon, S.C., the same once-segregated town of 6,300 that was home to Kenneth Manning, MIT's Thomas Meloy Professor of Rhetoric and of the History of Science.

He joined the Fed's Board of Governors in 2002 and was appointed chief economic advisor this past June. He has developed a reputation for challenging conventional thinking, particularly about transparency and communicativeness for the Fed, which some had regarded as an opaque institution.

For example, Bernanke advocates inflation targeting, a practice in which the central bank sets an explicit goal for inflation and is then held accountable for meeting that goal. The Fed's decision this year to begin providing two-year inflation forecasts has been credited to Bernanke's influence on the Board of Governors.

"You want to release information that helps the market and the public achieve more accurate expectations of future policy and the future state of the economy," Bernanke said in an interview published by the Federal Reserve.

Bernanke's interest in helping the public to understand and predict economic changes through Fed policies is reflected in his 2000 book, "Essays on the Great Depression" which examines America's devastating economic collapse of the 1930s.

The lessons from that decade, Bernanke has said, include the pivotal role of economic stability in maintaining social and political stability and the importance of international economic cooperation.