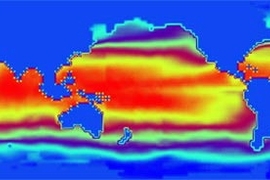 ↓ Download Image
Caption: Using the new Earth System Modeling Framework, researchers coupled an atmosphere model and an ocean model that had not interacted before. This image depicts the sea surface temperature after five iterations of the simulation. The collaborators on this field test are MIT and the Geophysical Fluid Dynamics Laboratory.
Credits: Image / Shep Smithline, GFDL; Chris Hill, MIT

Caption:
Using the new Earth System Modeling Framework, researchers coupled an atmosphere model and an ocean model that had not interacted before. This image depicts the sea surface temperature after five iterations of the simulation. The collaborators on this field test are MIT and the Geophysical Fluid Dynamics Laboratory.
Credits:
Image / Shep Smithline, GFDL; Chris Hill, MIT

These simulations are the first field tests of the new Earth System Modeling Framework (ESMF), an innovative software system that promises to improve predictive capability in diverse areas such as short-term weather forecasts and century-long climate-change projections.

Although still under development, groups from NASA, the National Science Foundation, the National Oceanic and Atmospheric Administration (NOAA), the Department of Energy, the Department of Defense and research universities are using ESMF as the standard for coupling their weather and climate models to achieve a realistic representation of the Earth as a system of interacting parts.

ESMF makes it easier to share and compare alternative scientific approaches from multiple sources; it uses remote sensing data more efficiently and eliminates the need for individual agencies to develop their own coupling software.

The newly completed field tests, known as interoperability experiments, show that the new approach can be successful. Although most of the experiments would require exhaustive tuning and validation to be scientifically sound, they already show that ESMF can be used to assemble coupled applications quickly, easily and with technical accuracy.

The MIT experiment combines an atmosphere-land-ice model from NOAA's Geophysical Fluid Dynamics Laboratory with an MIT ocean-sea ice model known as MITgcm (http://mitgcm.org/). This may ultimately bring new insights into ocean uptake of carbon dioxide and other atmospheric gases and information on how this process affects climate. Christopher Hill, principal research scientist in the MIT Department of Earth, Atmospheric and Planetary Sciences, and a member of the MIT Climate Modeling Iniatiative, led development of the software at MIT.

The ESMF research team plans to release the software to the scientific community via the Internet later this month.