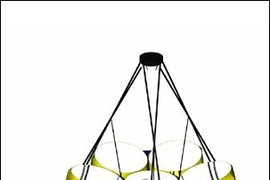 Caption:
Schematic shows the 25.4-meter Giant Magellan Telescope next to a 6.5-meter Magellan telescope. The 83-foot giant telescope is as wide as an eight-story building is tall.
Credits:
Image courtesy / Carnegie Institution

MIT astrophysicists and their colleagues are excited about the latest milestone toward developing a giant telescope that among other things will allow direct observations of planets orbiting stars in solar systems beyond ours.

On Dec. 13 the Carnegie Observatories of the Carnegie Institution signed an agreement with the University of Arizona's Steward Observatory Mirror Lab to produce the first mirror for the Giant Magellan Telescope (GMT). The telescope will have a diameter of about 25.4 meters or 83 feet--making it about as wide as an eight-story building is tall.

Slated for completion in 2016 at Carnegie's Las Campanas Observatory in Chile, the GMT will have 10 times the resolution of the Hubble Space Telescope enabling a variety of new projects and observations.

"At the very top of that list would be the direct observation of exo-planets around nearby stars and observation of objects yet younger (and therefore more distant) than the youngest objects observable today," said Paul Schechter, the William A. M. Burden Professor of Astrophysics, who leads the MIT group that is part of the eight-member consortium developing the GMT.

The new telescope will be composed of seven, 8.4-meter primary mirrors arranged in a floral pattern. It builds on the successful heritage of the two 6.5-meter Magellan telescopes, the first of which began science operations in early 2001. "The same individuals involved in the building of Magellan constitute the core of the GMT design group," Schechter said.

What role do ground-based telescopes play in the era of satellite telescopes like the Hubble? For one, said Schechter, "ground-based telescopes can be much bigger, which is important because a telescope's light-gathering power is proportional to the square of its diameter. The Hubble is only 2.4 meters in diameter, and the next-generation space telescope, which ought to be finished at about the same time as the GMT, will be smaller than the present Magellan telescopes."

Detailed information about the design of the GMT and the science that it will perform is located on the web (http://www.gmto.org/).

Hailing from a small town in Italy, Matteo Bucci is determined to address some of the unknowns plaguing fundamental science.

The paper test measures the level of neutralizing antibodies in a blood sample and could help people decide what protections they should take against infection.