MIT leaves behind a rich history in Tech Square 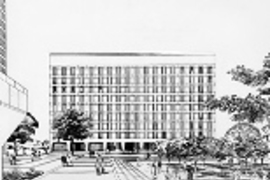 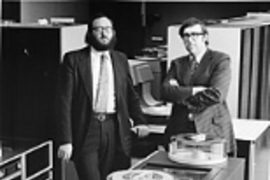 ↓ Download Image
Caption: Joel Moses and Michael Dertouzos (then associate director and director, respectively, of the Lab for Computer Science) in the laboratory during the mid-1970s.
Credits: Photo courtesy / MIT museum 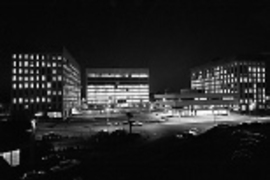 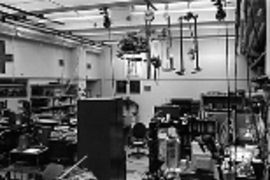 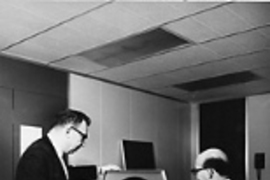 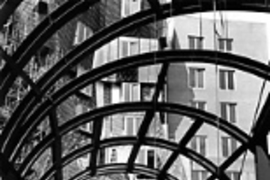 ↓ Download Image
Caption: The "Nose,"Â  a large mirrored cylinder on the south side ofÂ  Stata Center that will house a robotics lab.
Credits: Photo / EMILY CORBATO

Caption:
Joel Moses and Michael Dertouzos (then associate director and director, respectively, of the Lab for Computer Science) in the laboratory during the mid-1970s.
Credits:
Photo courtesy / MIT museum

Caption:
Technology Square glows at night soon after it was constructed more than 40 years ago.
Credits:
Photo courtesy / MIT museum

Caption:
The "Nose,"Â  a large mirrored cylinder on the south side ofÂ  Stata Center that will house a robotics lab.
Credits:
Photo / EMILY CORBATO

Building NE43, known simply as Tech Square to many people at MIT, is not a building that would ever win any design awards. It has the aura of a standard-issue government building, circa 1960. The lobby walls and artwork--pictures of rocks of unknown origin--are brown, the windows don't open and the radiators make a loud hissing noise. The feeling throughout is low-tech, with lots of old-fashioned metallic desks, whiteboards full of scrawled numbers and a utilitarian cafeteria.

Nonetheless, Tech Square has played a profound role in the evolution of computing. From Fernando CorbatÃ³ and the early proponents of time-shared computing to the legendary hackers of the late 1960s, from Dave Clark and his fellow researchers who put together much of the infrastructure of the Internet to Tim Berners-Lee and the World Wide Web Consortium, this nondescript building has been home to an astonishing array of individuals united in their belief that computers are the defining technology of our age.

All that's changing this week, as Tech Square's nearly 1,000 residents begin moving across Main and Vassar Streets into their new home--the Ray and Maria Stata Center for Computer, Information and Intelligence Sciences. Though the formal opening isn't until May, there is both excitement and trepidation about the Stata Center's more spacious and airy design (including windows that most definitely will open). But there is also a sense of sadness about leaving a place that's been home to so many people and ideas for more than 40 years.

The Technology Square complex of office buildings between Broadway and Main Street was originally the site of a soap factory that made Lux Flakes. When the owner, Lever Brothers, left for greener pastures in the late 1950s, the City of Cambridge asked for MIT's help in redeveloping what had become a run-down parcel of land. Under MIT President James Killian's guidance, the Institute partnered with Cabot, Cabot & Forbes to develop commercial office space; MIT provided the financing while the company provided the marketing and development expertise. The first building to open was 545 Technology Square (later redesignated number 200).

At the time, the Institute's first major computer research laboratory, the now legendary Project MAC, was just getting underway. "In the early 1960s, computer science research at MIT was scattered in over a dozen small groups and there were no CS academic programs," said Professor Fernando J. CorbatÃ³, one of Tech Square's pioneers. "[Professor Emeritus] Bob Fano saw a chance to change that by leading the formation of Project MAC. The goal was to bring together the many computer science research activities under a common roof, using an interactive time-shared computer as the unifying research vehicle."

The question was, which roof? "My decision to start Project MAC was made on Thanksgiving Day 1962, after extensive talks with J.C.R. Licklider, who was then at DARPA," Fano said in a recent interview in his old Tech Square office filled with orange moving crates. "The next day, Friday, I met with Provost [Charles] Townes, and told him what we had in mind. He said 'Go ahead,' but then asked where I was going to do it."

Space has always been a challenge at MIT. When Fano learned that the eighth and ninth floors of Tech Square had just been vacated by a computer services company, he jumped at the opportunity. As Project MAC evolved, more floors were taken until eventually MIT researchers filled the entire building. Some of the original researchers, led by Marvin Minsky, split off in 1970 to form the Artificial Intelligence Laboratory (AI Lab). In 1975, Project MAC itself was renamed the Laboratory for Computer Science (LCS). For the next quarter-century, Tech Square remained their joint home, with LCS having the first six floors and AI the top three.

From the beginning, one of Tech Square's defining characteristics was that it wasn't technically on the MIT campus at all--it was rented commercial office space. For many, this was a badge of honor; it went hand in hand with the "hacker ethic" that pervaded parts of the building in the late 1960s. But there were drawbacks as well, including the fact that few undergraduates ever found their way inside, and there was little interaction with faculty from other disciplines.

One reason Tech Square didn't feel like an academic building or a research lab was because of its other tenants, which included Polaroid and IBM at various times. The most intriguing tenant, still invoked by almost everyone who spent time in the building, was the Central Intelligence Agency, which had an office on the third floor under the name R.K. Starling Associates. The office spawned numerous pranks and jokes; one of the best known was a hallway sign that read "Intelligence," with arrows labeled "Central" and "Artificial" pointing to either side.

Such hacks were, of course, a central part of Tech Square life, and there were hundreds of them perpetrated over the years. One favorite involved using certain key sequences on a LISP computer to summon the elevator directly to the ninth floor. The special elevator wiring was hidden in a control box with a label that read: "Do Not Remove." It was signed "DH," meaning AI Lab researcher Danny Hillis, who went on to found Thinking Machines (and whose initials happened to be the same as those of the elevator maintenance person).

Tech Square's four decades as a research lab spanned every era of computing, from the IBM mainframes once housed in the ninth floor machine room down through minicomputers, workstations and exotics like the much-revered LISP machine. A recently discovered memo written by the late Michael Dertouzos, former director of LCS, in May 1983 confirms the arrival of the first IBM PCs for experimental use by senior lab members. Along with the main unit, keyboard and monitor, came two boxes of diskettes, two screwdrivers and a ream of paper.

Research topics also evolved, starting with the grand challenge of time-sharing and moving on to new problems as computer science began to mature. Tech Square served as the East Coast hub of the ARPANET (it was the original Network 18, known today as mit.edu); on the fifth floor, Dave Clark's group worked on the infrastructure for what would become the Internet, notably the TCP/Internet Protocols. Ron Rivest and the LCS Theory Group did pioneering work in encryption. In 1994, Tim Berners-Lee, inventor of the World Wide Web, set up the World Wide Web Consortium's global headquarters on the third floor of Tech Square.

By the late 1990s, "it was money that made the difference," said Institute Professor Joel Moses, a faculty member for 37 years who has also served as former provost, dean of engineering and head of the Department of Electrical Engineering and Computer Science (EECS). Tech Square had a long tradition of nurturing startup companies, including Hillis' Thinking Machines and Rivest's RSA Security. But with the tech boom in full swing, things took on a more frenetic pace. Dertouzos worried about people "calling in rich," and the occasional Porsche could be spotted in the parking lot.

And yet the basic ethos of the building never changed. It was still a place where researchers could do things pretty much without restrictions.

"If they didn't have it, they'd build it. Everyone had the freedom to roam--just don't break the network," said Tyrone Sealy, who came to the building as a high school student in the late 1960s and has done computer support ever since. (The building also remains the professional home of Richard Stallman, founder of the Free Software Foundation and a hero to many in the software community.)

Most of the rituals of Tech Square life remained the same as well. There were the annual holiday parties, the retreats to Cape Cod, Be Blackburn's Sweet Corn Fest, weekly EECS department lunches in the fifth-floor conference room, new generations of graduate students passing through and the basement Coke machines with their seemingly bottomless appetite for coins. Over time, each floor took on its own persona. The ninth floor became the hub of AI under the direction of Professor Rodney Brooks, the theorists were on floor three, and the headquarters for LCS were on the ground floor, where Dertouzos held court in his office.

Change started coming in fall 1999, when bulldozers tore up the parking lot and the surrounding landscaping. MIT had sold its interest in Technology Square back in 1973; the newest owners, Beacon Capital Partners, began an elaborate redevelopment project in the late 1990s. (MIT itself subsequently bought Technology Square in 2001.)

Whereas Technology Square once felt like a quiet backwater, it suddenly found itself surrounded by high-tech firms and biotech offices, led by pharmaceuticals giant Novartis. Suddenly there were new restaurants and a health club, and the entire north side of the Tech Square building was surrounded by a vast atrium.

The Stata Center, set to open after years of planning and construction, finally gives computer science researchers a home on the main MIT campus. Hopes are high for an even brighter next chapter, with computer scientists from the Computer Science and Artificial Intelligence Laboratory (the recently merged LCS and AI Labs) working side by side with new neighbors from the Department of Linguistics and Philosophy and the Laboratory for Information and Decision Systems.

Nevertheless, Tech Square will be missed. "It was a functional building which had its flaws," CorbatÃ³ said. But it was still home.

A version of this article appeared in MIT Tech Talk on March 17, 2004.