MIT group presents research on city car of the future 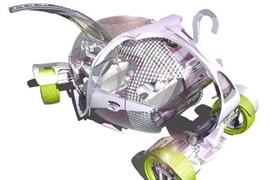 As part of the MIT Media Lab's concept car research project with architect Frank Gehry and General Motors, the Media Lab will present "Concept Car: A Work in Progress" on the evening of Wednesday, Sept. 8.

William J. Mitchell, head of the Media Lab's program in Media Arts and Sciences, together with Ph.D. candidate Ryan Chin, will present the scope and nature of the research project and the steps to defining a new vehicle architecture. The presentation is free and open to the public; it will begin at 7 p.m. in MIT's Bush Room (Room 10-105). A pre-lecture reception will be held at 5:30 p.m. at MIT's Wolk Gallery (Room 7-338), where "Smart City Cars in the 21st Century," an exhibition of this work-in-progress, is under way.

Mitchell and Chin will highlight the group's efforts to radically rethink how cars will be designed for the city of the future. Possible features for such vehicles could include programmable exteriors that change according to need; networked, embedded intelligence that can help a driver avoid a traffic jam or alert another car to a danger ahead; remote-control steering; or wheels that would enable "smart" parallel parking.

Rather than mere transportation devices, cars of the future can become our wheeled companions that continually learn about the city they inhabit, and use that knowledge to provide an intelligent interface to the resources the city offers. "Our hope is to invent a car that can function as though it has a good London cab driver built in," says Mitchell.

GM, which plans to build the final design as a concept car in 2006, is providing engineering and design support for the project with participation from Wayne K. Cherry, former head of design at GM, and Frank Saucedo, head of GM's Los Angeles design studio.

Mitchell is the former dean of MIT's School of Architecture and Planning. His most recent book, "Me++: The Cyborg Self and the Networked City" (MIT Press 2003), explores the ramifications of information technology in everyday life.

The "Smart City Cars in the 21st Century" exhibit can be viewed Monday through Friday, 9 a.m. to 5 p.m., through Oct. 15 at the Wolk Gallery. It is free and open to the public.