Reid and Richards honored for service 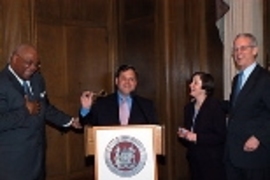 ↓ Download Image
Caption: Cambridge City Council member and former mayor Kenneth Reeves (left) and Mayor Michael Sullivan (at podium) share a laugh with Rebecca Vest and President Charles M. Vest as they present the Vests with a key to the city at the MIT Community Service Awards ceremony. The Vests were recognized for their commitment to positive town-gown relations during their 14 years in the President's House.
Credits: Photo / Donna Coveney 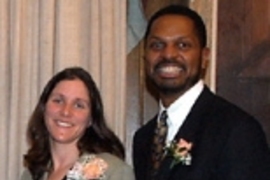 Caption:
Cambridge City Council member and former mayor Kenneth Reeves (left) and Mayor Michael Sullivan (at podium) share a laugh with Rebecca Vest and President Charles M. Vest as they present the Vests with a key to the city at the MIT Community Service Awards ceremony. The Vests were recognized for their commitment to positive town-gown relations during their 14 years in the President's House.
Credits:
Photo / Donna Coveney

President Vest announced the winners in a ceremony that he and his wife, Rebecca Vest, hosted in their home on March 9. True to the spirit of service, each winner will be asked to designate an organization in Cambridge to which MIT will make a $1,000 donation.

The awards were established in 1994 to recognize the achievements of citizens, organizations and institutions at MIT and in the Cambrdge community that have made community service a priority.

Following the awards presentation, Cambridge Mayor Michael Sullivan and City Councilor Kenneth Reeves had a special presentation for the Vests--a large gold key to the city in recognition of their community service.

Vest described Reid's and Richards' character and community spirit with clear enthusiasm to a gathering that included all the past recipients of the award. Both awardees give "unselfishly of their talent, time and resources to enhance the quality of life in Cambridge," he said.

Richards has served as executive director of the Community Art Center in Cambridge and director of the Teen Media Program, as well as a catalyst for the formation of the Kendall Community Group and a participant in MIT's Community Fellows program. In her current role, Richards integrates the after-school efforts of more than 20 different groups citywide.

The citation on Richards' award said: "Susan's efforts help to sustain the entire community, not just the children who participate in the programs so vital to their development. Educators, working families and employers all benefit from the availability of programs in which children can establish meaningful, nurturing relationships with adults."

"There are still a lot of kids out there who really need us to do better, and they're not too far away from here. We have to make sure that we're developing leadership in our young people," Richards said.

Reid leads efforts to foster greater diversity in scientific, technical and other professional fields at MIT, particularly through the Minority Introduction to Engineering, Entrepreneurship and Science Program (MITE2S) and the Saturday Engineering Enrichment and Discovery (SEED) Academy, which he designed and launched.

Reid's award citation described him as an "exceptional leader of programs to enhance the education and career opportunities of public high school students who have traditionally been underserved. His dedication to enriching not only their lives but also the living and learning experiences of students at MIT distinguishes Karl as a model of good citizenship."

Reid commented, "I have had a privileged education. MIT has been a chrysalis for me, and out of it I emerged a butterfly. I am thrilled that I can now reach back and help other caterpillars."

KEY TO THE CITY

Mayor Sullivan's presentation of the key to the city was not on the formal agenda, but he and other community officials were quick to point out President and Mrs. Vest's shared role in improved and positive university-city relations during the 14 years that Vest served as president of MIT.

Handing the hefty gold key to Vest, Sullivan commented, "Here is a key to unlock city doors, but you have already done that. You've stepped inside and become part of our home and part of our family, and for that I thank you both."

"It's uncanny what you have done, but you have made, I think, the most exemplary university and city relationship I know of. It was crafted during your time. You are leaving it to us as a great legacy and we appreciate it," Reeves said.

A version of this article appeared in MIT Tech Talk on March 17, 2004.