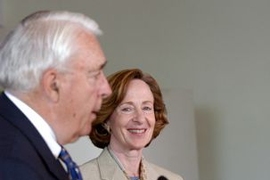 Neuroscientist Susan Hockfield took the podium at the MIT Faculty Club this morning after being introduced as the 16th president of MIT. Her first words, "Hello, friends," had an immediate disarming effect on those present.

She was greeting three members of the MIT community she had met during the search and interview process who were seated in the first row at the press conference, but the warmth and intimacy of her words were felt by all 30 or so people in the room, and may have set the tone for her presidency.

Hockfield, who will take office in early December, was elected by a unanimous vote at a special meeting of the MIT Corporation this morning. She is the first woman and the first life scientist to hold that office.

The 53-year-old professor of neurobiology is presently on the faculty of Yale University where she is provost. At MIT, she will take the reins from Charles M. Vest, who announced his resignation last December.

In addressing the press conference today, Hockfield expressed her delight, excitement and honor at the occasion. "I am incredibly excited," she said. "I am deeply honored to be selected as MIT's next president."

"As a scientist, I have always regarded MIT as a beacon, projecting an incredibly bright light that has illuminated the path of discovery and innovation for the entire world," said Hockfield.

"I know that I am only one of countless people who have been inspired--and awed--by MIT's strengths along the entire continuum of scholarship, from the most fundamental, basic research into the nature of our world, to the most advanced applications and technological innovations.

"It is of course the mission of every university to produce and disseminate knowledge, and yet MIT advances both parts of this mission at an astonishing rate. Discoveries and innovations have poured forth from the Institute in a staggering torrent--from engineering and science, to be sure, but just as impressively from economics, business, the arts, the social sciences, and the humanities."

"I will be responsive to the cadence of life and work here," said Hockfield.