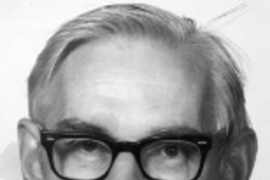 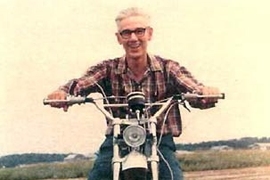 ↓ Download Image
Caption: John Longwell, in a photograph from his memorial service program.

Caption:
John Longwell, in a photograph from his memorial service program.

Professor Emeritus John P. Longwell of MIT, a chemical engineer widely known for his research in synthetic fuels, combustion and petroleum refining, died on Oct. 6 from congestive heart failure. He was 86.

Professor Longwell, a native of Colorado, received the B.S. degree from the University of California at Berkeley and the Sc.D. from MIT in 1943. During World War II, he was a member of the Talos missile research team at Johns Hopkins Applied Physics Laboratory.

He joined the MIT faculty in 1976 after a 30-year career at Exxon Research and Engineering Company, where he concentrated on petrochemicals, fuel processing and combustion, and advanced to the company's highest technical rank, senior scientific advisor. At Exxon, he also organized and managed the Central Basic Research Laboratories.

At MIT, he taught courses in chemical engineering and worked to develop energy-related programs in that department and in the MIT Energy Laboratory. He served as associate director of the Center for Environmental Health Services. In 1981 he was named the first Edwin R. Gilliland Professor of Chemical Engineering at MIT.

His own research included studies of coal, oil shale and biomass conversion, as well as formation and control of emissions from combustion. In 1979 the American Institute of Chemical Engineers recognized Professor Longwell for his scientific contribution in combustion, both in the design of industrial burners and jet combustors, and in reaction kinetics and transport. He held 23 patents.

Professor Longwell authored or co-authored numerous unpublished government studies and dozens of publications on combustion, alternative fuels, synthetic fuels and hydrocarbon fuels for aviation. He is best known for his role in developing the well-stirred reactor, widely used for studying combustion kinetics.

In 1966, he testified on the use of alternative fuels for aviation before the Senate Subcommittee on Aerospace Technology and National Needs. As a member of the National Research Council committee on alternative technologies for the destruction of chemical weapons, Professor Longwell played an important role in displacing incineration with alternative technologies at the eight chemical weapons stockpile locations in the continental U.S.

A member of the National Academy of Engineering, Professor Longwell received wide recognition from professional organizations and from his peers. He served as president of The Combustion Institute and received its Sir Alfred Egerton Medal in 1974. In 1980, he was appointed to the Energy Engineering Board of the National Research Council's Assembly of Engineering.

An avid conservationist and lifelong outdoorsman, he enjoyed fishing, bow-hunting, hiking and skiing as well as quieter pursuits including woodworking, rock and mineral collecting and listening to classical chamber music, said Marion Longwell, his wife of 59 years.

He is survived by his wife Marion of Kingston, Wash.; his brother Robert Longwell of Houston; two daughters, Martha Blair of Rochester, N.Y., and Ann Strickland of Kingston; his son John of Evergreen, Colo.; and eight grandchildren.

A memorial service was held Oct. 16. Donations in Professor Longwell's name may be sent to the conservationist Henry's Fork Foundation, P.O. Box 550, Ashton, Idaho 83420, or to the John Longwell Memorial Fund at MIT, Room E19-411.

A version of this article appeared in MIT Tech Talk on November 10, 2004 (download PDF).