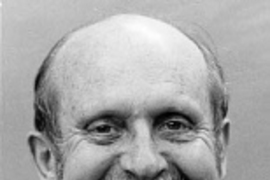 Professor Emeritus William "Ted" Martin, former head of the Department of Mathematics and chair of the faculty, died May 30 at the age of 92.

Under Martin's leadership from 1947-68, the math department grew from a small service department into one of the major world centers of pure and applied mathematics. During his first year as head, Martin proposed a "postdoctoral instructorship or visiting lectureship" program. This became the C.L.E. Moore Instructorship Program, which was launched in 1949 and continues to this day. It is designed to attract the most promising postdoctorates in mathematics to MIT to develop their research and teaching careers.

Martin collaborated with MIT faculty members R.H. Cameron, Stefan Bergman and Norbert Wiener on analytic functions of several complex variables and on the Wiener integral or Wiener measure, which Wiener proposed in 1930. During the 1950s he wrote a series of papers with Salomon Bochner, establishing generalizations of classical results in function theory for analytic functions on complex spaces with singularities.

Following his tenure as department head, Martin chaired the faculty from 1969-71 and the Education Division Steering Committee from 1972-73 (he also served as division's director from 1973-75).

A gifted lecturer and teacher, Martin taught first-semester calculus for five years after his official retirement. He co-chaired the steering committee for the Cambridge Conference on School Mathematics from 1962-66.

Beginning in 1961, he served as chair of the steering committee of the Education Development Center's African Mathematics Program to improve mathematical educational programs in English-speaking African nations. He visited Africa regularly over a 14-year period and was a member of numerous regional African management committees. He continued these activities after his retirement from MIT in 1976, visiting the University of Science and Technology in Ghana in 1978.

Martin co-authored three influential books: "Several Complex Variables" (1948), "Elementary Differential Equations" (1956) and "Differential Space, Quantum Systems, and Prediction" (1966). He was co-editor of "Analysis in Function Space" and "Selected Papers of Norbert Wiener," both published in 1964. He was a consulting editor for the McGraw-Hill International Series of Pure and Applied Mathematics, a co-founder of International Journal of Mathematical Education in Science and Technology, an editor of Mathematical Surveys and an editorial committee member for the AMS Bulletin.

Martin was born in Arkansas in 1911, received his B.A. from the University of Arkansas in 1930, and his M.A. and Ph.D. degrees from the University of Illinois at Urbana-Champaign in 1931 and 1934 respectively. Following an appointment as a National Research Council Fellow at the Institute for Advanced Studies, Martin came to MIT as instructor in 1936 and joined the faculty in 1938. He remained at the Institute until his retirement, except for a stint as head of Syracuse University's mathematics department from 1943-46.

After Martin and his wife retired to Block Island, he spearheaded an effort to have affordable housing built for year-round residents; the resulting group of four houses were designated the "William Ted Martin Housing" by the islanders and were one of the achievements of which he was most proud.

He is survived by four sons, Seelye Martin of Seattle, Jim Martin of Bloomfield Village, Mich., William Gray Martin of Brooklyn, N.Y. and Thomas Martin of Ellsworth, Maine. He is also survived by five grandchildren, a step-grandchild and a brother, James Martin of Lindale, Texas. His wife of 60 years, Lucy Dodge Gray, predeceased him.

A memorial service will be held on July 17 at 11:30 a.m. in St. Dunstan's Chapel, Christ Church, Bloomfield, Mich.

A version of this article appeared in MIT Tech Talk on June 9, 2004 (download PDF).