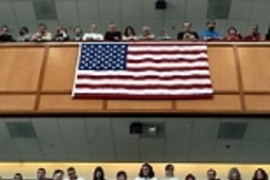 A group of state and federal legislators participated in a rare nonpartisan panel to highlight the flourishing collaboration among the regional academic, military and private sectors at an MIT Lincoln Laboratory event on Feb. 13.

The speakers emphasized the benefits to technology, innovation and security resulting from the proximity of research centers such as Lincoln Lab, Hanscom Air Force Base and the Natick Soldier Systems Center to companies such as Raytheon, MITRE and BAE Systems.

Sen. Edward M. Kennedy (D-Mass.) thanked both the "representatives of the armed forces of our country for their extraordinary service to our nation in Iraq and Afghanistan, and the men and women of the Lincoln Lab family whose extraordinary work is so essential to our national security."

Kennedy, a ranking member of the Senate Committee on Armed Services, also praised industries within the eastern Massachusetts and New Hampshire technology cluster for their contributions to technological innovations that have enhanced homeland security and "saved the lives of servicemen."

"I hold you in awe," Gov. Mitt Romney told Lincoln Lab employees and other workers from the cluster around the lab and the two bases. "You address the military threat and domestic threats we face. Think of it--in the last Gulf War, it took 72 hours to reach a target in the Middle East. Now it takes 20 minutes. From a protection standpoint, our ability to protect ourselves as a nation lies in knowledge and brain power as well as jobs and new products from here," Romney said.

Sen. John Sununu (R-N.H.) looked back as he gazed about the Lincoln Lab atrium. "When I graduated from MIT, the smart students all came to work for Lincoln Lab. The best and the brightest find a home here, with the integration of systems, with technology transfer, and with all the military and the private sector have to offer," said Sununu (S.B. 1961, S.M., Ph.D.).

U.S. Reps. Marty Meehan, Edward Markey and John Tierney, all of Massachusetts, also commented on the value of proximity among academic, military and industrial research facilities.

A version of this article appeared in MIT Tech Talk on February 25, 2004.