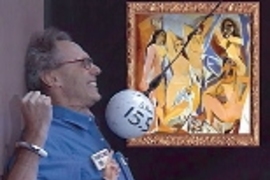 ↓ Download Image
Caption: A composite image from the poster advertising Walter Lewin's IAP class on "Looking at 20th-Century Art Through the Eyes of a Physicist." The painting shown is "Les Demoiselles d'Avignon" by Pablo Picasso.

Caption:
A composite image from the poster advertising Walter Lewin's IAP class on "Looking at 20th-Century Art Through the Eyes of a Physicist." The painting shown is "Les Demoiselles d'Avignon" by Pablo Picasso.

A physicist's whirlwind tour of modern art, which included a lecture covering more than 30 artists and a dozen art movements as well as field trips to three art museums, was the sleeper hit of IAP 2004.

The course--"Looking at 20th-Century Art Through the Eyes of a Physicist"--drew a full house to Room 6-120 on Jan. 14 for the lecture and slide show by Walter H.G. Lewin, professor of physics. Undaunted by frigid winter weather, more than 100 people went on the visits to Boston's Museum of Fine Arts and Harvard's Fogg Art and Busch-Reisinger Museums.

"This was the most fun I've had at MIT. It was the first time I was able to understand why a great work of art is great," said Huzeifa Ismail, a graduate student in chemistry.

In his dynamic two-hour lecture, Lewin outlined breakthroughs in art between 1885 and 1920. Analyzing slides of works by artists ranging from Monet to Picasso to Mondrian, Lewin demonstrated how the visual arts grew increasingly detached (or "liberated") from natural forms.

"As in science, pioneering work in art is the most fascinating and most important," he declared.

Picasso, he said, was "arguably the most important artist of the entire 20th century, and his 1907 painting, 'Les Demoiselles d'Avignon,' is the most important painting of the century. Why? It's a completely new way of looking at the world. It is the beginning of Cubism--a way of dissecting a subject and viewing it from different angles simultaneously."

Like many artists, Picasso was influenced by scientific developments, including photography and non-Euclidean geometry, Lewin said. But art evolves outside those influences, too, and it's not always beautiful.

In fact, don't even bother to look for beauty--or even anything reassuring or familiar--in 20th-century art, Lewin said. Many works of art now known as masterpieces met with ridicule and hostility when they were made. The point is to appreciate the history and the vitality of a work that pushes the envelope.

"What was plain ugly 100 years ago is now beautiful because your way of seeing has been changed. To appreciate 20th-century art, you must abandon the idea of beauty. The beauty of a pioneering work of art is in the meaning. A new way of looking at the world is never the familiar warm bed; it's always a chilling cold shower," Lewin said.

The son of art collectors and an avid museum-goer and art collector himself, Lewin is well known at MIT for his dynamic lectures on Newtonian mechanics and electricity and magnetism.

"There are remarkable similarities between science and art. Pioneering breakthroughs in both have changed our lives," he said.

As an example, Lewin cited Piet Mondrian, a Dutch painter known for his red, yellow, blue and black works that look like otherworldly power grids. Mondrian, the inventor of neoplasticism, "affected the way we see everything. Clothing, furniture, typography, toothbrushes--even these eyeglass frames are affected by Mondrian," Lewin said. "If he knew I was wearing these eyeglass frames, he would be very proud!"

But breakthroughs in science and in art are also very different. "Science can be right or wrong. But that's not the case in art. Art is not verifiable like science. Art can be good or bad, but never wrong," Lewin said.

"In science, you can pretty much predict which way it's going. The Holy Grail today is dark energy. It makes up 70 percent of the universe and we don't know what it is. The unification of four forces into a grand unified theory, whether there is life on other planets--the future will tell us one way or the other," he said.

But who could have predicted that Duchamps' "Bicycle Wheel" of 1913 would anticipate Andy Warhol's pop-art soup cans 40 years later?

"The way art evolves is unpredictable. It may be driven by technology, wars, politics. But it's also a prophetic vision that reaches far and deep into the future. That's why I love it," Lewin said.

Ismail had a suggestion for Lewin's future, one that was echoed by other course participants: "Do it again!"

"Rather than teaching physics, which benefits only physics students, Professor Lewin should teach semester-long courses in art history. This would benefit the entire MIT community," Ismail said.

A version of this article appeared in MIT Tech Talk on February 4, 2004.