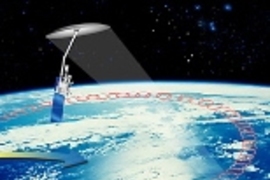 ↓ Download Image
Caption: The Hydros satellite will rotate to focus its beam for scanning a wide area of Earth's surface as it circles the planet every 90 minutes at an altitude of 670 kilometers.
Credits: Photo / DARA ENTEKHABI

Caption:
The Hydros satellite will rotate to focus its beam for scanning a wide area of Earth's surface as it circles the planet every 90 minutes at an altitude of 670 kilometers.
Credits:
Photo / DARA ENTEKHABI

CAMBRIDGE, Mass.--NASA has approved an MIT-led project that will measure soil moisture from space, providing data needed to assess the impacts of global change and improve accuracy in weather forecasting.

That measurement has been missing from the array of clues--rainfall, atmospheric chemistry, humidity and temperature--that are used by scientists to predict change in the local and global climate. Using soil moisture, they can calculate evaporation (the process that links the water, energy and carbon cycles), giving them a better understanding of global change.

"Soil moisture has been one of the Holy Grails. The community of Earth-system scientists has been trying to measure it for a long, long time, but couldn't because it's so expensive," said Dara Entekhabi, a hydrologist and professor of civil and environmental engineering at MIT who is principal investigator of the Hydros project. "We have a measurement for rainfall, atmospheric chemistry, humidity and temperature, but surface soil moisture has been missing.

"In the same way that temperature tells the state of the surface oceans, soil moisture controls the rate of the water cycle, which affects weather and climate and how much evaporation takes place," said Entekhabi.

Hydros (the Hydrosphere State mission) will make unprecedented measurements of Earth's changing soil moisture and its freeze/thaw state that together define the state of Earth's hydrosphere, which links the water, energy and carbon cycles over land.

Numerical models used for day-to-day weather prediction need soil moisture estimates as initial conditions for forecasts. Incorporating real observations into these models will improve forecast accuracy. Soil moisture is among the top unmet environment measurement requirements of the Department of Defense because of its impact on mobility over land as well as aviation weather.

In addition, Hydros will tell whether the surface soil moisture is frozen, which can help scientists determine the length of the growing season in forests, telling them whether a forest is a net source or net sink of carbon. The Kyoto Protocol of 1997 called for each participating country to have a quota for carbon emission, a system that presumes all atmospheric carbon has been accounted for. If industry is a carbon source, a forest could be a carbon sink, offsetting the carbon released by industry. Without proper measurements, the Kyoto agreement wouldn't be able to balance the books.

"It would be like having a bank account and not knowing whether someone is depositing into it or withdrawing from it. You can't balance your bank statement," said Entekhabi. "We need this if we're going to stabilize the amount of carbon in the atmosphere."

Hydros was one of three projects selected by NASA from among 18 competitors in its Earth System Science Pathfinder (ESSP) program, characterized by medium-sized missions capable of being built, tested and launched in short time intervals.

Hydros will be launched into near-Earth orbit in December 2009 on a satellite that will be equipped with a reflector antenna (the same type used to send cell phone signals) weighing less than 40 pounds and measuring six meters in diameter. The instrument package includes a radar and a radiometer that both work in the low frequency microwave range of about 1.4 GHz. The antenna will rotate at 15rpm to scan the Earth, measuring how much water is contained in the soil.

The $250 million project will be designed, built and launched by a team of scientists from MIT's Department of Civil and Environmental Engineering and Center for Space Research, NASA's Jet Propulsion Laboratory and Goddard Space Flight Center, and the Canadian Space Agency. The Department of Defense is a funding partner as well.

The other two ESSP missions approved are Aquarius, which will measure the salinity of the ocean, and the Orbiting Carbon Observatory, which will create an atmospheric carbon dioxide profile.