Up on the roof, algae appetites may transform waste into energy 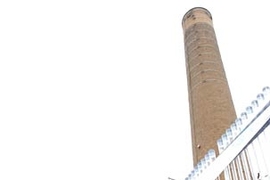 Every algae's got a hungry heart, and--who knew?--some algae are especially hungry for the tasty toxins in modern smog. For example, single-cell algae readily consume carbon dioxide and other power plant emissions and emit oxygen during photosynthesis.

This makes single-cell algae tiny power plants in their own right--power plants that may transform toxic emissions to renewable energy, according to Isaac Berzin, 37, a former postdoctoral student in chemical engineering and founder of a Cambridge-based company, GreenFuel Technologies.

Berzin started GreenFuel, a 2001 receipient of a $1,000 grant in the MIT $50K Entrepreneurship Competition and an additional $10K as 2002 runner-up, with guidance from MIT faculty including Robert Langer, the Kenneth J. Germeshausen Professor of Chemical and Biomedical Engineering; Gordana Vunjak-Novakovic, principal research scientist in the Harvard-MIT Division of Health Sciences and Technology, and Charles Fine, Chrysler Leaders for Manufacturing Professor in the Sloan School of Management.

Berzin retains a student's delight in discovery and natural processes. Speaking of algae, he has said, "It's very tolerant of everything. You can find it in the Charles River, in sewage, in boiling water, in ice, in Antarctica, in the Dead Sea."

Berzin's idea is simple, once you accept algae's appetites and its astonishing efficiency. Laboratory research at GreenFuel had already demonstrated that single-cell algae could consume carbon dioxide or nitrogen oxides and then be "harvested" in a reusable form. This form, a biomass similar to an artist's soft charcoal, potentially could be burned like coal or liquefied into oil or used to make plastics, nutraceuticals or food.

Now, Berzin and GreenFuel are taking their system to the roof of MIT's cogeneration plant on Vassar Street. Their goal: to determine if the system can be scaled up so actual emissions from a live power plant can be transformed from greenhouse gases to, well, green resources.

GreenFuel has installed 30 bioreactors on the roof of the Cogen plant, MIT's main steam, chilled water and electrical power plant. Each bioreactor is composed of polycarbonate tubing in the shape of a triangle; the tubes are clear, to allow sunlight in. Inside each tube, exhaust will mix with the algae. Thanks to photosynthesis, the algae will consume the CO2 and pollutants, grow in volume and give off oxygen and nitrogen.

The algae will be harvested and dried into the charcoal-like solid to be reused as fuel. In a later phase Cogen heat may be used for the drying process.

Peter Cooper, director of utilities, commented, "The Department of Facilities is very pleased to host this beta test of a very promising technology that addresses the difficult issue of greenhouse gas emissions reduction. When Cogen came on line in 1995 using state-of-the-art gas turbine technology, it reduced regulated pollutants by 45%. Also, by the fact that cogeneration reuses otherwise wasted heat, thereby burning less fuel in the fist place, MIT's CO2 emissions dropped by nearly 60,000 tons. As a utility engineer I think of the GreenFuel process capturing CO2 for reuse as analogous to cogeneration's reuse of energy."

The GreenFuel bioreactors are currently visible from the sidewalk in front of Building 37 on the MIT campus.