The skinny on fat: MIT researchers establish first link between eating and aging 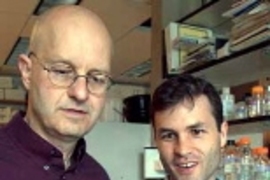 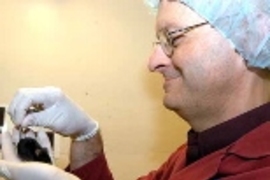 Forget the drastic reduction in carbs and calories called for by diet dictators. The day when people can eat their favorite foods, stay thin and live to be 120 without getting age-induced diabetes or cancer may be nearer than we think.

Scientists have known for decades that controlled famine can extend the lifespan of mammals by as much as 50 percent and that those long-lived, lean mammals don't get the diseases of old age. But just how a vastly reduced caloric intake achieves that feat has been a mystery begging for a solution--until now.

Researchers at MIT believe they've found the key to a long, lean, healthy life in a single protein that controls whether a mammal stores fat or sheds it.

"For the first time, this study gives us a glimpse of how calorie restriction works at the molecular level. And it will ultimately lead to health benefits in people," said MIT Professor of Biology Leonard Guarente, who has been studying the aging process in yeast, roundworms and mice for more than a decade.

In the June 2 online issue of the journal Nature, scientists in Guarente's lab, including FrÃ©dÃ©ric Picard, a research scientist in the Department of Biology who is an author of the paper, will publish their research results about how the Sirt1 mammalian gene promotes fat mobilization in mice.

A mammal generally burns the protein and carbohydrates in its food immediately; it stores fat in special cells called white adipose tissue (WAT). When it reduces its caloric intake, the WAT stops storing fat and begins releasing it for metabolism.

The paper's authors learned that fat is released from or metabolized by the body, rather than stored, when the Sirt1 protein senses short-term famine and turns off the receptors that normally keep fat stored in fat cells. Thus fat cells shed their fat.

They write that this happens because the "Sirt1 protein activates a critical component of calorie restriction in mammals; that is, fat mobilization in white adipocytes. Upon food withdrawal the Sirt1 protein binds to and represses the genes that are controlled by PPAR-gamma, the fat regulator," preventing fat from being stored in the body.

"The ability of fat cells to sense famine [or short-term hunger] and release the fat is regulated by this gene," said Guarente. "We like to think this applies to people as well as mice, but we don't know for sure. If we could make this happen in people, it wouldn't just make them live longer; it might also help prevent diseases of aging, like cancer, diabetes and heart disease."

Because WAT also makes hormones, especially leptin which controls satiety, Guarente speculates that by putting hormones into the bloodstream, fat cells also tell the body how fast to age.

"Conversely, fewer fat cells tell the body that it's time to hunker down for survival. This means that evolutionarily speaking, fat plays a very important role," he said.

We know already fat or lack of it has vast implications in the lives of people, but putting them on an austere diet just isn't feasible.

"It's easy to put rodents on a spartan diet. With people it's not so easy; they don't want to diet," said Guarente.

In fact, the side effects in a human being whose diet was cut by about 50 percent--down to 1,000 to 1,200 calories a day, the reduction necessary to get the 50 percent extension in the lifespan--would create a very lean, cold, unhappy person with no sex drive. "It would be like eating every other day," says Guarente.

Unless, that is, you could find a way to mimic the molecular effect of famine without the actual dieting.

"If we could make a drug that would bind to Sirt1 and fool the body into thinking that it needed to release that fat, then maybe people could get the benefits of calorie restriction without the side effects," he said, describing a sort of fountain-of-youth drug that he hopes to create.

How would such a drug work? Would it require vigorous exercise? Might there be additional complications in humans, such as reduced resistance to disease?

"Evolutionarily, you would think it would make humans more resistant to infectious disease," Guarente said. "But you never know."

He suspects that vigorous exercise also will be required. The next step in the process, he added, is to determine if an increase in Sirt1 in the body leads to a higher rate of metabolism.

This research was funded by the National Institutes of Health.

A version of this article appeared in MIT Tech Talk on June 9, 2004 (download PDF).