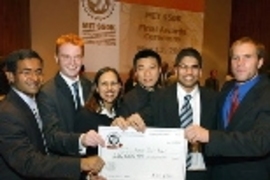 Active Joint Brace is an electromechanical orthotic device that increases functional independence by working in tandem with existing muscles. The portable, low-cost, noninvasive device is aimed at the 10 million Americans with disabilities who have difficulty lifting light objects and need help with daily activities.

As winner of the Robert P. Goldberg Grand Prize, the Active Joint Brace team receives $30,000; the runners-up receive $10,000 each. This is the sixth year in a row that a medically oriented team has won the $50K contest.

Active Joint Brace team members from MIT are Kailas Narendran, a research specialist in the Department of Mechanical Engineering; Raja Surapanani, a junior in management; and graduate students Mira Sahney of the Leaders for Manufacturing program, Hocking Cheng of the Harvard/MIT Division of Health Sciences and Technology and the Sloan School's Biomedical Enterprise Program, John McBean of mechanical engineering, and Shashi Kant of the System Design and Management program. Non-MIT team members are Joe Jackson, a student at Harvard, and Adam Rizika (S.M. 1999) of Kendall Partners in Cambridge.

Hyperscore is software that allows the user to compose music by drawing lines and shapes of various colors across a computer screen, unlocking musical creativity without needing years of training. The software will be targeted for children, educators and professional musicians.

"We found these plans to be extraordinary -- among the best we've ever seen," said Joe Hadzima, a lecturer at the Sloan School of Management, managing director of Main Street Partners LLC and a $50K judge since the contest's inception. "In judging, it was difficult to select a winner, a tribute to the fact that the MIT $50K has become a very serious generator of ideas and plans."

Seven finalists were chosen from 127 entrants with 425 team members participating. Judges, including noted venture capitalists and entrepreneurs, selected the winning teams based on their potential of becoming "tomorrow's leading firms."

The other finalists this year were Active Spectrum, Advanced Diamond Solutions, LumArray and MicroLaser.

"The MIT $50K's value is in the learning process. Participants learn how to take an idea, build a team around it, formulate a strategic vision, and develop and articulate it in the form of a business plan," said Marcus Lopez, lead organizer and a junior in mechanical engineering. "They then pitch and secure interest for their plan, often turning it into a real business. It's the process of becoming an entrepreneur, which is far more valuable than winning the prize money."

Each finalist team presented its plan to an audience of venture capitalists and business leaders at the final awards in Kresge Auditorium. The event reached a global audience through a live Internet broadcast. Along with the winners, many of the finalists and other entrants are planning to launch their businesses. The ceremony's keynote speaker was Vinod Khosla, founder of Sun Microsystems.

The $50K competition brings together MIT students with complementary strengths in management, engineering and science. Organizers each year share best practices with competitions around the world through their Global Startup Workshop. This year people came from more than 35 countries.

MIT's competition has launched more than 80 companies worth more than $4 billion. They include Akamai Technologies and firms acquired by Microsoft, Motorola, Broadcom and others.

For team rosters and other information, go to http://50k.mit.edu.