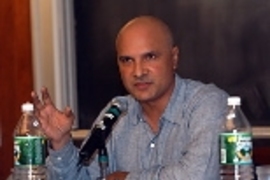 Confusion about the phrase "weapons of mass destruction" was the topic of discussion Oct. 30 when experts in security studies analyzed the muddle that develops from lumping nuclear, chemical and biological weapons together under one policy.

Moderator Kosta Tsipis, the former director of MIT's Security Studies Program, laid out the problem for an audience packed into Room 3-270: "From the purely physical viewpoint, it is misleading to place nuclear, biological and chemical weapons in the same rubric." Nuclear weapons generate immediate, inescapable destruction of all organic material for many, many miles, he said, and there is no defense. Chemical and biological weapons, by contrast, kill or sicken on a slower, smaller level.

"Wear a surgical mask and you are immune from the effects of all but the most sophisticated biological weapons," said Owen Cote, associate director of the Security Studies Program (SSP). Against chemical weapons, "don a mask and go to the basement."

The speakers at "Weapons of Mass Confusion: Assessing the Real Risks," the Herbert Hollomon Memorial Symposium sponsored by the Technology and Culture Forum, placed the dangers of the three types of weapons in a context that made clear the importance of different political and military approaches for each.

Cote advocates grouping weapons of mass destruction into two classes, nuclear and biological/chemical, based on the means of production. Biological and chemical production facilities tend to be small and obscure, and the weapons are produced in small quantities. Nuclear weapons production is just the opposite, requiring long periods of time and production facilities so large "you can see them from space," he said.

North Korea broke ground on a reactor in the late 1980s, is thought to have produced plutonium in the early '90s and agreed to end the activities in 1994. "The point is, we saw this coming for a long time," said Cote.

"You can aspire to prevent nuclear weapons by limiting the spread of technology. With biological weapons, you can't prevent the spread. You have to assume they're going to be able to get biological and chemical weapons in some form," he said.

"Nuclear weapons are legal. Biological weapons have been illegal since 1925. That to me makes a difference. There is a taboo that surrounds the development, storage and use of them," said Guillemin. The Geneva Protocol banned the use of biological weapons "in part because the military and public detested them as dishonorable weapons." On the other hand, "nuclear weapons are controlled by treaties, but they are not illegal," she said.

Guillemin called the U.S. government's current approach to civil defense "isolationist" and compared it to the backyard nuclear shelters of the 1950s, which were built "at a time when there were no real international relations between the U.S. and Soviet Union." Now, the Department of Homeland Security is "saying that every single community has to prepare [for an attack by biological weapons]. I think it's a tremendous distraction from other more important things," she said, saying that the consequences of biological weapons are overestimated.

"Disease is opportunistic. Its effects don't fall evenly in the population. The ordinary rules for controlling it actually work pretty well," she said, recalling that the rule of thumb for dealing with SARS--"stay home"--was effective.

Steven Miller of Harvard's International Security Program said the trend of the past 25 years has been away from deterrence and arms control and toward defense and offense. The present administration is aggressive because President Bush and his advisors believe "we face a gaggle of rogue states that you can't threaten in a retaliatory way to stay their hand."

In a brief commentary, Institute Professor Emeritus Philip Morrison said that "unregulated states of sovereignty and the incredible growth of technology cannot long last together." He urged a return to programs of the "older kind"--deterrence and arms control.

"We don't know what really might happen if the lines of war are crossed. Crossing these lines is not something we want to do," Morrison admonished.

Hollomon (S.B. 1940, Sc.D.) was Assistant Secretary of Commerce for Science and Technology from 1962-68, president of the University of Oklahoma, founder and director of MIT's Center for Policy Alternatives and co-founder of the graduate program in management of technology.