President Vest to step down 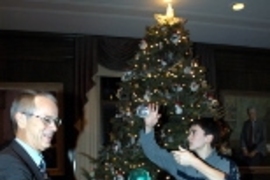 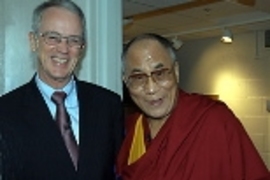 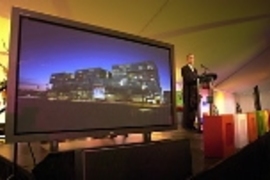 ↓ Download Image
Caption: Simmons Hall glows on the screen on Vest's right at the dedication of the dorm in 2002.
Credits: Photo / Donna Coveney 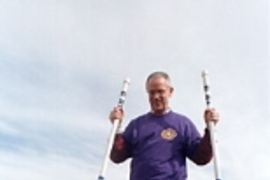 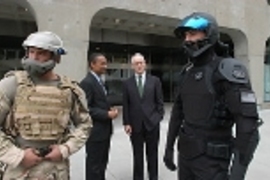 ↓ Download Image
Caption: Vest with soldiers and Claude Bolton Jr., secretary of the Army for acquisition, logistics and technology (at Vest's right) at the dedication of the Institute for Soldier Nanotechnologies in May.
Credits: Photo / Donna Coveney 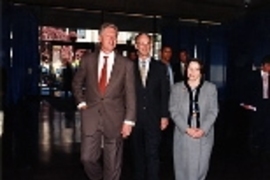 Caption:
Simmons Hall glows on the screen on Vest's right at the dedication of the dorm in 2002.
Credits:
Photo / Donna Coveney

Caption:
Vest with soldiers and Claude Bolton Jr., secretary of the Army for acquisition, logistics and technology (at Vest's right) at the dedication of the Institute for Soldier Nanotechnologies in May.
Credits:
Photo / Donna Coveney

Charles M. Vest, the 15th president of MIT who shaped his 13-year-plus presidency into a campaign of determined advocacy for research, science and diversity and openness in education and research, announced last week that he is stepping down from that post.

"Chuck" Vest's e-mail inbox was jammed with more than 100 messages by Monday afternoon, and well-wishers by the scores continue to voice their fondest sentiments.

"The reaction has been extraordinary," he said, as visitors to the annual holiday reception at Gray House hosted by Vest and his wife Rebecca dropped by to offer their best wishes Monday evening. "Nine out of 10 messages used the same word--'proud.' It has been a great outpouring."

The messages have come from a diverse group--faculty, students, administrators, and members of the various national organizations to which Vest belongs or has chaired. Many statements praised him for always "standing up for what was right," and for "making so many of us proud to be associated with MIT."

True to his fashion, Vest has or intends to respond to each and every e-mail, including one from a student which said, "You did not ask our permission to do this!"

Vest, 62, is stepping down because "the time is fast approaching when MIT should benefit from the renewal that comes with selecting a new president and developing the next stage of its vision and programs," he said. He will continue serving as president until next fall, or as soon as a successor is named.

Vest is credited with leading one of the most intense periods of change at MIT since the post- World War II era.

An engineer and former university provost, Vest was appointed MIT president in 1990. In the past 100 years, only Karl Taylor Compton (1930-1948) has served longer as president of MIT, which was founded in the mid-19th century by William Barton Rogers.

Vest's tenure ranks him sixth in seniority among the 62 presidents in the Association of American Universities, only one of whom has served his current institution longer than Vest.

During the Vest presidency, MIT has undertaken major innovations in education and research, developed strong ties with other academic, governmental and industrial organizations both in the United States and overseas, strengthened the diversity of its people and programs, and transformed its campus. During this time, MIT's endowment has grown from $1.4 billion to $5.1 billion, and $1.72 billion has been raised towards MIT's $2 billion capital campaign. Eighteen of the 25 largest gifts from individuals in MIT's history have been received during the Vest presidency.

More than half of the current MIT faculty has been hired since 1990 and since then has developed many new or expanded fields of research and scholarship, such as brain and cognitive sciences (including the establishment of the McGovern Institute for Brain Research and the Picower Center for Learning and Memory); nanotechnology (including the creation of the Institute for Soldier Nanotechnologies); biological engineering; genomic medicine (the Broad Institute); engineering systems; and new media.

Vest also spurred a major examination of student life and learning and pursued what he termed "an enhanced learning community." Among the resulting programs were:

Vest also fostered MIT's engagement on the world stage through a variety of large-scale, innovative ventures, often with other institutions. Among them were:

On the national stage

Vest's broad but measured interpretation of the role of president of the Institute made its mark on national policy as well. On assuming the presidency, he went about rebuilding public understanding and support of higher education and research. He continues to be a regular presence in the halls of Congress and the executive offices where he champions the cause of research, science, higher education and innovative partnerships among universities, government and industry.

In the post-9/11 era, Vest has been a national spokesperson for the centrality of higher education and research to the nation's well-being at a time when some national security policies appeared to conflict with the concept of open research and education. "Knowledge creation thrives in openness and suffers in isolation," he wrote in his annual report for 2001-02, which concluded with a set of recommendations designed to provide both national security and the openness necessary for research and education. He has carried a similar message to the national arena through meetings with high-ranking federal officials, publications, and speeches, including an address last month to the National Association of State Universities and Land Grant Colleges.

Vest has logged more than 100 visits to Washington, D.C., to confer with as many as 250 different government officials in more than 450 individual conversations. This is in addition to more than 80 trips to Washington for service on various national councils, task forces and advisory boards.

He is a member of the President's Council of Advisors on Science and Technology and chaired the Secretary of Energy Advisory Board's Task Force on the Future of Science Programs at the Department of Energy, which recently completed its work. In 1993, at the request of President Clinton, he chaired the Committee on the Redesign of the International Space Station, which revitalized the project at a time when its future was in question.

He is vice chair of the Council on Competitiveness and former chair of the Association of American Universities.

Vest has made perhaps an even larger stamp on MIT's Cambridge campus itself. For example, square footage through new construction during his term is greater than the size of the entire MIT campus when the university moved from Boston to Cambridge in 1916. Moreover, significantly updated landscaping and renovation of academic and residential facilities has brought new vitality to the appearance and functionality of the campus.

With the completion of the building projects now underway, approximately 25 percent of the MIT campus will have been constructed since 1990, when Vest became president. In this building program he championed the use of world-class architects to design major facilities such as:

Commenting on the quality of the architecture, Vest said, "I believe that the buildings at this extraordinary university should be as diverse, forward-thinking and audacious as the community they serve. They should stand as a metaphor for the ingenuity at work inside them."

In 1998, Vest forthrightly acknowledged problems cited by senior women faculty in the School of Science and supported efforts toward corrective measures. The published report on the study--and his leadership with other university presidents on this issue--received international recognition, stimulating reexamination of these equity issues at other universities across the country. More than two-thirds of MIT's women faculty have been hired since 1990.

Vest has also been a staunch supporter of the principle of financial aid based solely on need. In 1992, MIT went to trial to fight the U.S. Justice Department's contention that antitrust statutes were violated when Ivy League schools, MIT and others shared information about the financial need of students who had been admitted to more than one school. A lengthy court battle ensued, which ultimately resulted in the establishment of the "MIT Standards of Conduct" that enable many colleges committed to need-based financial aid to exchange certain post-award data, and also led to legislation that permits colleges to adopt a common methodology for measuring need.

Prior to assuming the MIT presidency in 1990, Vest was provost and vice president for academic affairs of the University of Michigan, where he previously served as dean of engineering. Born in Morgantown, W.Va., he earned his B.S. in mechanical engineering from West Virginia University and both the M.S. and Ph.D. degrees from the University of Michigan. He is a member of the National Academy of Engineering and a Fellow of the American Academy of Arts and Sciences, the American Society of Mechanical Engineers, the Optical Society of America and the American Association for the Advancement of Science.

A version of this article appeared in MIT Tech Talk on December 10, 2003.