Giving campaign volunteers get into the spirit 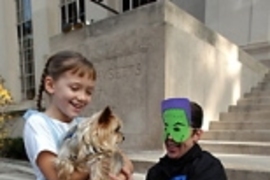 ↓ Download Image
Caption: Sgt. Cheryl Vossmer (right) of the MIT Police, a.k.a. the Incredible Hulk, was one of many Community Giving campaign volunteers who got dressed up on Halloween to hand out candy and spread the word about the campaign's kickoff. In a bit of serendipity, Isabelle Harris, dressed as Dorothy from "The Wizard of Oz," cradled Vossmer's dog Sophie--who bears a striking resemblance to Toto. Isabelle's father, David Harris, is a graduate student in mechanical engineering.
Credits: Photo / Donna Coveney 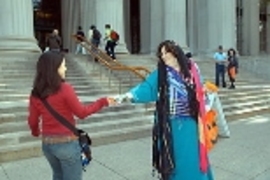 Caption:
Sgt. Cheryl Vossmer (right) of the MIT Police, a.k.a. the Incredible Hulk, was one of many Community Giving campaign volunteers who got dressed up on Halloween to hand out candy and spread the word about the campaign's kickoff. In a bit of serendipity, Isabelle Harris, dressed as Dorothy from "The Wizard of Oz," cradled Vossmer's dog Sophie--who bears a striking resemblance to Toto. Isabelle's father, David Harris, is a graduate student in mechanical engineering.
Credits:
Photo / Donna Coveney

In a burst of Halloween fun, department representatives for MIT's Community Giving campaign kicked off the 2003 drive by handing out candy and orange cards encouraging charitable donations on Halloween morning.

Dressed in costumes ranging from simple masks to elaborate outfits borrowed from the MIT Costume Shop, members of the 14-woman volunteer crew greeted colleagues and friends at various high-traffic spots around the campus, including West Garage, the Stata garage, the entrance to MIT Medical and on Main Street.

"Co-workers coming into the building had no idea I was dressing up and handing out candy today," said Margaret Mahoney, who borrowed a friend's 1950s costume--poodle skirt, button-down sweater, ankle socks and pearls--for the occasion. Mahoney stood at Building E19 from 8 to 10 a.m.

"We laughed together, then they asked what I was doing. I told them the purpose of my dressing up was to help support Community Giving at MIT," said Mahoney, an administrative analyst in Information Systems.

The costumes and free candy brought "lots of smiles to many faces," said Ellen Stordy, the "witch" stationed at 77 Massachusetts Ave. Stordy, assistant to the dean of admissions, got her "neat cape" from the Costume Shop.

For Stordy, community giving has personal meaning: She belongs to the Big Sister organization and was matched last year with a "neat Little Sister, 10. It's an extremely meaningful and inspiring experience for me. There are so many young girls in need of mentors--I highly recommend it," she said.

Marielle Risse, the fortune teller stationed at 77 Massachusetts Ave., described her morning as "all fun, with lots of surprised but happy looks and cars honking."

Risse, an administrative assistant in the School of Engineering, also brings personal experience to her role in the MIT Community Giving campaign. In 1997, the Red River flooded her hometown of Grand Forks, N.D., with 52-foot-deep water, and she became one of 50,000 displaced persons. The American Red Cross provided groceries, supplies and meals to them. She now works as a volunteer in the United Way's citizenship program (United Way contributes to the Red Cross).

Whether encouraging giving, giving back to organizations that had previously helped them, or simply representing the spirit of generosity, the campaign's department representatives agreed their Halloween morning time was well spent.

Sogna Scott, an administrative assistant in the Department of Facilities, enjoyed "seeing the reactions of people as we handed them the cards and candy," she said. She, too, drew on memories to give perspective to the morning of "just plain fun."

"In my teens, I was involved with a youth group at my church. I enjoyed shopping for families who were having a hard time. Seeing the children get excited to have food in their home and even a small toy was fulfilling to me. It made me realize how truly blessed I was," she said.

The MIT Community Giving Campaign runs through Dec. 31. All employees should receive pledge packets this week. Contributions may be made to the Community Service Fund, the United Way of Massachusetts Bay or to other local health and human service agencies via payroll deduction, check or credit card.