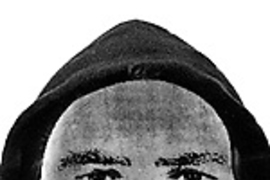 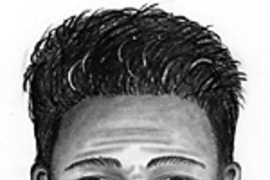 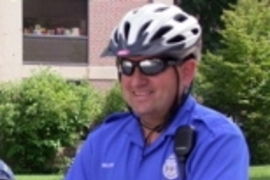 ↓ Download Image
Caption: "The real heroes in a case like this one are the women who come forward," says Officer Donald Miller of the MIT Police.

Caption:
"The real heroes in a case like this one are the women who come forward," says Officer Donald Miller of the MIT Police.

When MIT Police Officer Donald Miller saw the computer-generated image of a suspect in a series of recent sexual assaults in the western suburbs, he picked up the phone. And he picked up his pen.

Miller, known as "Dusty," is a bicycle patrolman on the MIT campus with a background in art who has turned his drawing ability and forensic training to composite drawing, also known as police sketching. He provides drawings of suspects to police forces in the area, including Cambridge, Somerville and Arlington.

Within two days of volunteering his skills to the Westborough police, Miller had prepared a sketch of the suspected serial rapist that appeared daily in every media throughout New England.

"My goal isn't to become famous for this. My goal is to help law enforcement catch the suspect. The real heroes in a case like this one are the women who come forward. So many rape cases go unreported. These women are helping us all," said Miller.

Miller's procedure is to read the police report on a crime, interview the victim or victims, provide quick sketches and meet a second time with the victims to see if his portrait matches--or perhaps jogs--their memories.

"I ask, 'On a scale of 1 to 10, does this match?' It's especially good if they recall jewelry like earrings, or a tattoo or a scar. Sometimes clothes are helpful, too. I always hope they get a good look and recall some detail," said Miller.

Miller, the father of three girls and two boys ranging in age from two to 19 ("no artists so far") and a native of Woburn, has been an artist all his life. After attending art school, he operated a sign company for 25 years. Before coming to MIT five years ago, he worked on the police force in Carlisle.

Three years after joining the MIT Police, Miller returned to studying art--but this time, he chose forensic art. He completed a course in composite drawing that gave him "the right tools and the skills" to combine his ability and experience in art with his commitment to police work, he said. The course gave him both confidence and a new calling within law enforcement.

"I never did a portrait before I took the course. I did some cartooning--actually, I've done all the people at the station here--but now I'm pretty fast on composites," Miller said.

He enjoys his present assignment as a bicycle patrolman, he said, because it's "so easy and quick to get around on campus when there's a call and because people find the bicycle uniform--golf shirt, shorts, bike helmet--unintimidating. People are willing to ask questions and talk with me on the job. It's a great way to do police work."

A version of this article appeared in MIT Tech Talk on August 27, 2003.