Students are still eager to fly in space 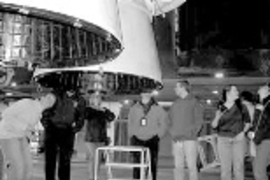 ↓ Download Image
Caption: MIT students check out a space shuttle during an IAP visit to the Kennedy Space Center. The class trip was led by Professor Jeffrey A. Hoffman, a former astronaut.

Caption:
MIT students check out a space shuttle during an IAP visit to the Kennedy Space Center. The class trip was led by Professor Jeffrey A. Hoffman, a former astronaut.

Though the Columbia tragedy hammered home the dangers of space travel, MIT students in aeronautics and astronautics remain enthusiastic about America's space program and eager to become astronauts themselves.

"I definitely had the goal of becoming an astronaut before Saturday's accident, and I still have that goal now. Being an astronaut would be the ultimate challenge as well as a chance to accomplish something truly meaningful," said Brett Bethke, a sophomore.

Bethke was one of 12 students who accompanied Jeffrey A. Hoffman, a veteran astronaut and professor of the practice in the Department of Aeronautics and Astronautics (aero/astro), to visit Kennedy Space Center in Florida on Jan. 19-24. Many of them shared Bethke's vision.

"The tragedy did not alter my perception of the danger involved in space exploration. But if something is worth living for, it's worth dying for. Space exploration enthralls me and it always has. I would gladly risk my life to further it," said sophomore Johanna N. Przybylowski, president of the MIT chapter of Students for the Exploration and Development of Space.

"If someone said you'll be going into space, how could you not be excited? But it's not a thrill or desire for excitement that motivates me. Excitement is why I go snowboarding. A love of exploration, discovery and learning is why I would become an astronaut."

Patrick L. Korb, a sophomore in management, reported that "actually seeing the spacecraft within arm's reach" at Kennedy had inspired him further.

"If anything, this event has refocused me even more on the manned space program, either as an engineer sending people into space or as an astronaut myself," Korb said.

Darlene Utter, a junior in aero/astro, believes that becoming an astronaut is "every aero/astro person's dream. It's just magical to think we have the capability to get off of our planet. The science and engineering in the design of millions of different systems is overwhelming!"

"Really bad vision" will keep Utter earth-bound, she said, but she still plans to work in the aerospace industry.

David B. Smith, a sophomore in aero/astro, has also factored health concerns into his career goals. "I wish I could be an astronaut. I have epilepsy, so I can't. Instead I plan on becoming an administrator of NASA and help other people become astronauts," he said.

For Smith, the appeal of the space program is that every flight is a pioneering one. "Each piece of a mission paves the way for the next mission to go further. The central theme for myself and many people at NASA is to improve life on Earth and extend life beyond," he said. The fiery end of the Columbia mission has made Smith "only more certain that I want that weight placed upon my shoulders."

Said Omar Bashir, a sophomore in aero/astro: "Being an astronaut is a risky job, but I know it's a very important one. This event does not scare me away from human space travel. Now I'm even more motivated to design and work on the next-generation shuttle along with the people at NASA.

"Human space travel is exploration at the highest level. A developed space program will yield great benefits for mankind as a whole. We don't know which benefits it will yield, or how many, but neither did Columbus or any other early explorers."